One of my greatest pleasures is flying over countries I know and pinpointing places I’ve been to. The next is spotting places I want to go to. Years ago I was flying back from somewhere in South-East Asia, or maybe it was Australia, when I spotted way down below, smack in the middle of the Bay of Bengal, a cluster of myriad islands. You probably know the kind – encircled by white then degrees of turquoise, seemingly afloat in endless ultramarine. 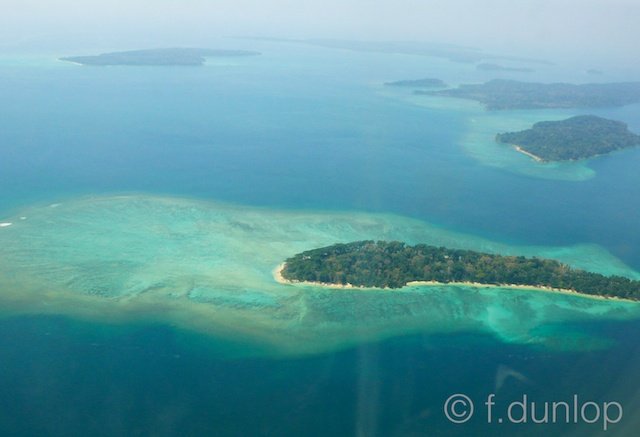 Coral reefs anyone? Those islands stuck in my mind for years, seemingly inaccessible yet never forgotten. Now I’ve finally been there. They are India’s Andaman Islands, in other words – Paradise Found, to use a well-honed cliché. The trip was so complicated to set up that it was only at 5.20 on a Friday afternoon (the airline office closed at 5.30) that the e-ticket finally popped into my inbox for a Monday morning flight. Those remote Indian islands really played hard to get.

Landing in Port Blair, the Andaman capital, from Chennai (after a flight via Sri Lanka) whisked me mentally back to flights taken years earlier from tiny little airstrips in Indonesia. On one occasion the small plane had taken off from a ploughed field – where I had been the only passenger to check in. Not only that, the official who had rolled up late to inspect my ticket had never seen a computerised one before.

Anyway, Port Blair is nothing to write home about – best left asap. It was clearly once beautiful, as lush hills roll around a bay where islands speckle the watery horizon. But somehow the scattered concrete and mismatched houses didn’t add up to either atmosphere or seduction. Above all I knew that better stuff lay beyond. The only striking element was the goats – dozens of them. Roaming everywhere, they seemed completely at ease, oblivious to traffic yet apparently easily rounded up at the end of the day to be milked, providing essential nutrition for the majority Bengali and Tamil population. 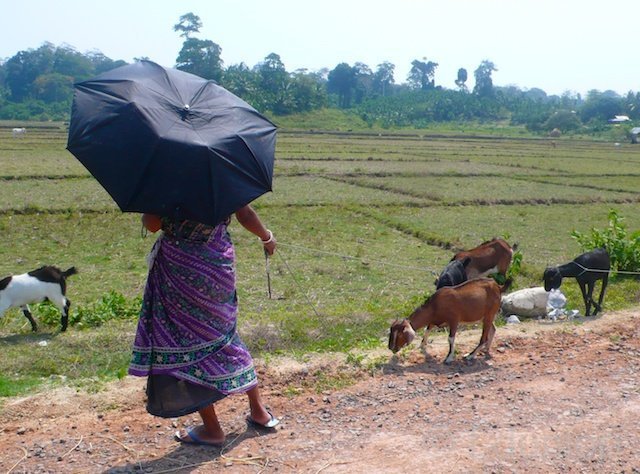 Below is one of the lovely inhabitants – an incredible mix of Tamil, Bengali, Burmese and Karen people (one of Burma’s horrifically repressed minorities), most of whom were brought here by the Brits in the late 19th and early 20th century. The earliest inhabitants were convicts, or rather viewed as such by the Brits after the First War of Independence in 1857 (which Brit history books refer to as the Indian Mutiny). Later came economic needs – the loggers needed cheap manpower after all…. 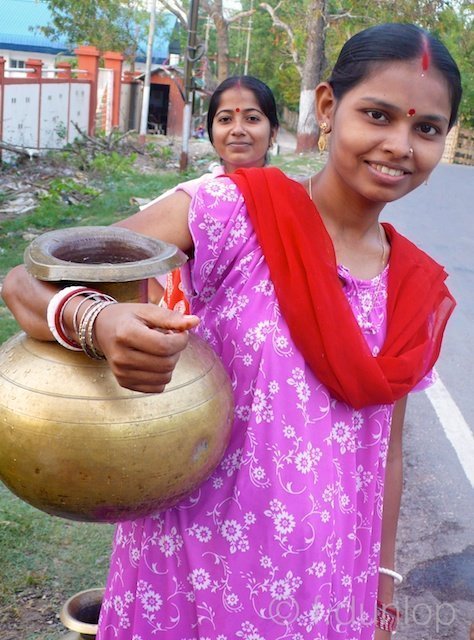 A few hours later, heading out of town to spend the night at an eco-camp on the edge of a vast mangrove swamp I suddenly saw tsunami-struck landscapes, apocalyptic visions of the aftermath. Dead trees emerged from flooded rice-fields and later on I was shown how huge tracts of mangrove had died. Although the Andamans actually suffered little compared to the Nicobars further south, to Sri Lanka, Thailand and Sumatra, they did get shaken. Only two people died in Port Blair but the earthquake left its mark on the landscape, tilting the islands to such an extent that sea-water washed around the tree roots and seeped into the padi-fields. Over the next few days, as I was boated around dozens of islands, I often saw long stretches of completely dead trees fronting deep green tropical forest and blinding white beaches. It was like a constant reminder – that paradise always has a price. 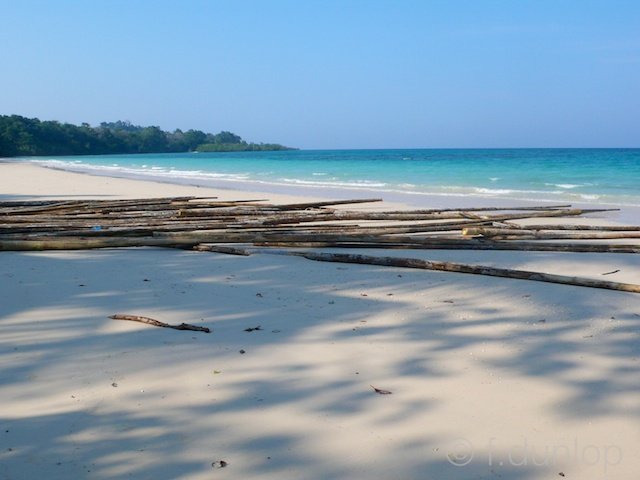 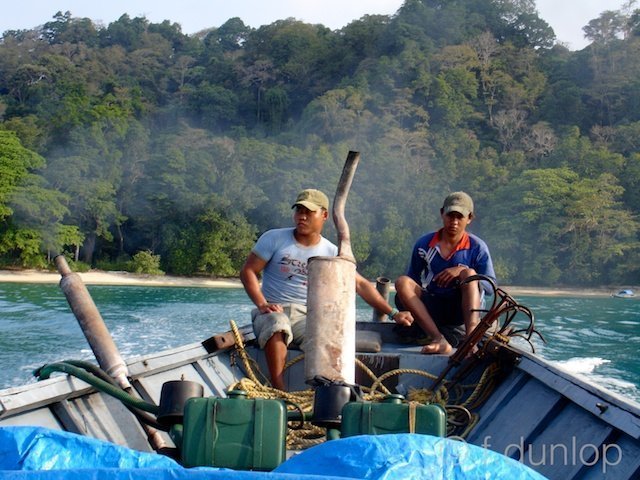 After several hours of motorboat across the blissful sea to Havelock Island, the most touristic of the archipelago, tropical farniente kicked in. Some days were spent camping on wild beaches where cows strolled down to the waves, others were spent ensconced in a beautiful thatched hut, part of a relaxed resort built in a regenerated banana plantation – Barefoot at Havelock. All elements fused together in a humid tropical heat that was also draining. Like Rajan the elephant who refused to swim (that’s another story that may come later), I happily resisted over-activity. 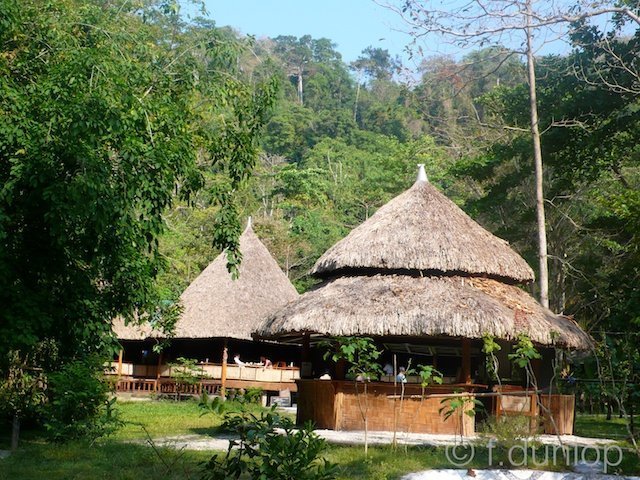 Listening to the melodic song of some 45 bird species from my verandah was easily enough, capped by a stroll through the magnificent forest of towering hardwoods bordering the legendary Beach no 7 on Havelock Island. A divinely fresh grilled fish spiked with ginger and garlic was served with huge smiles at a local restaurant-shack. Finally a dip in the azure waves, although I didn’t spot the resident dugong – but then you can’t have it all can you?

PS An update on Rajan, the elephant made world-famous by photos of his underwater antics – well he was just one of many brought to the Andaman for logging purposes, and is now retired. I saw him though … 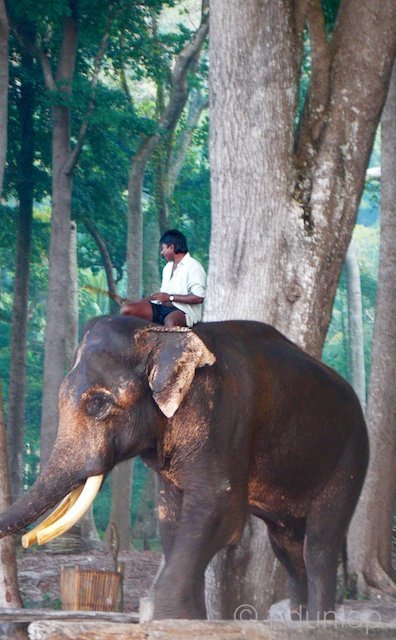 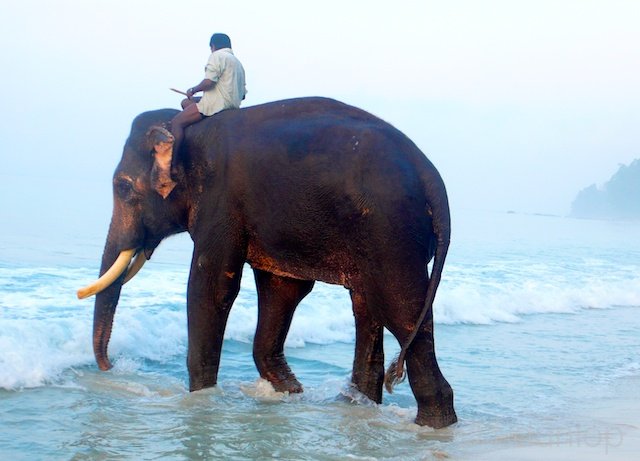