A few weeks ago I was revelling in the cradle of civilisation – well one of them, Damascus, which claims to be the longest continuously inhabited city in the world. A few thousands years old, a mere cough down the echoing tunnel of time. It’s a city that draws you in, easy-going people, easy to find your way around, easy on the eye. Completely seductive in fact: Syria’s crown-jewel – although Aleppo is amazing too.

Of course I loved the Ummayad mosque, the beating heart of the old city and number three in Islam’s pecking order after the Kaaba (or is it the mosque in Medina?) and the Dome of the Rock in Jerusalem. The vast marble-paved courtyard is usually chocka with Shiite pilgrims from Iran who flock like crows to see one particular shrine in the east wing. Just outside the mosque walls is Saladin’s tomb, surprisingly low-key considering how thoroughly this Kurdish warrior thrashed the crusaders. The mausoleum stands next door to a “putting on special clothes room” – aka a cloakroom where western women have to dress up like monks in hooded robes. They look at you and say – “size 2”! In the main prayer hall the head of John the Baptist is another big draw. And in the middle of the complex is the fabulous courtyard, some façades faced in extraordinarily intricate mosaic, serenely spacious, colonnades down one side and ablution fountain in the centre – all in all, a push-over conversion.

Even more astounding is the fact that this mosque started life B.C. as an Aramean temple to the storm god, then became a Roman temple to Jupiter, next a Christian church, and finally in the 7th century (that’s extremely early days in the Islamic calendar) started to function as a mosque. Sign of those tolerant times was the fact that both religions worked side by side for decades until there were too many Muslims and the Christians were forced to move on. If you’re in Damascus, don’t miss a last glimpse of the mosque as the light fades and the minaret takes on wonderfully garish hues.

Not far away is another great Damascene institution, Bakdash. Founded in the 1890s this ice-cream parlour is seemingly on everyone’s itinerary. I’d first heard about it when talking to Lucy and Greg Malouf (authors of Saha, a book on Syrian and Lebanese food) in Melbourne last summer, who said the elastic ice-cream was tops. So there I headed, armed with various guide-books that said just the same thing. The secret ingredient apparently is the ground root of a kind of orchid which replaces egg. I went, I saw, I tasted and I have to say I was slightly disappointed. But the pistachio topping was ace and the almost studious atmosphere at the tables in the back parlour quite extraordinary.

There’s something captivating about the light in this city. When I was there it was autumn and the sunlight still strong. There are moments when shafts of light slip through apertures in the ceilings of a caravanserai or sneak into shadowy souk passageways to create pure magic. In the evening the heavy brass lanterns are hard to better, often perforated to make dizzying patterns of light and shadow. Moroccans, eat your heart out, the Damascenes did it first. In fact I can’t wait, as I’m soon to return to Cordoba, the Ummayad’s first European site, via Morocco, in the 8th century. Damascus gave me a strong sense of this Andalucian city, so time to see it again.

Finally – well for this blog anyway – there are pomegranates. Juices of deep crimson, darker and thicker than blood, a liquid that you feel pumping through your veins. Divine. 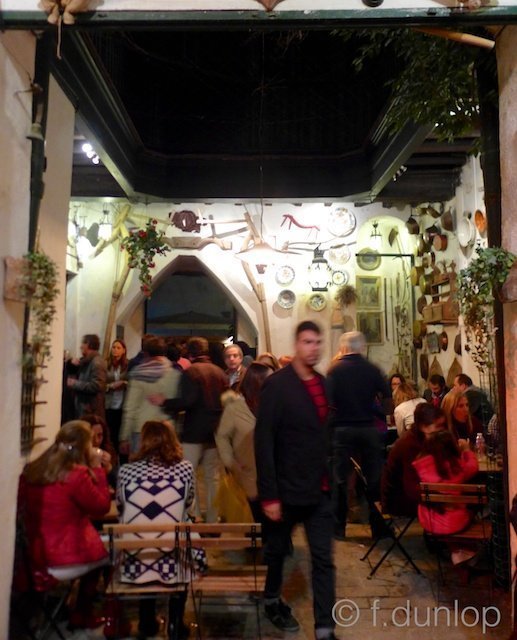