Sleep at the Bauhaus in Dessau

My recent trip in the footsteps of the Bauhaus movement turned out to be a totally illuminating experience. I’ve always been a Bauhaus fan, but without knowing the real story of this influential design movement, nor realising how much it was enmeshed in German history. Apart from that though, the trip from Weimar to Dessau and Berlin really spelled out the gulf that still exists between former East Germany and West. It was an eye-opener, and I strongly recommend it to anyone remotely interested in design, architecture and modern history.

Industry was the backbone of Germany’s 20th century economy (it still is), and belching chimneys, snaking pipelines, giant vats and cylinders blanket much of the landscape. But we were told that since reunification one third of the population has left the east, while those that remain don’t exactly look well-heeled, certainly not on the trains we took. But it was the momentum of this industrial prowess that inspired the Bauhaus to move away from its early arts and crafts orientation of Weimar days in the early 1920s to develop the purist lines of functional form in Dessau. 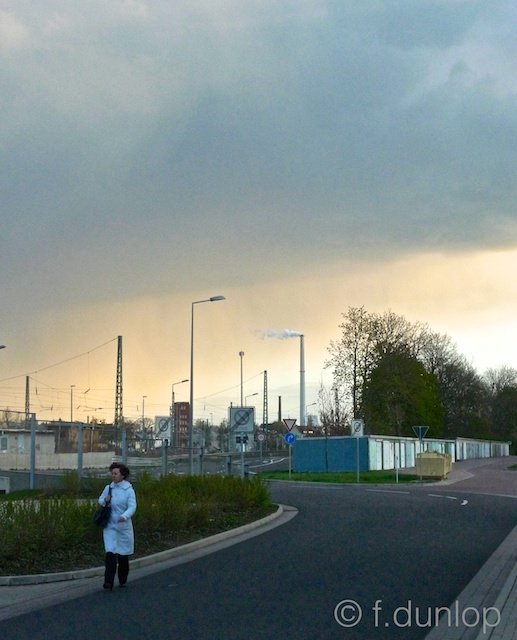 In fact the school was lured to Dessau in 1925 after the increasingly powerful National Socialists (aka Nazis) had slashed its budget in Weimar. Walter Gropius, the architect-director, was only too happy to be offered the chance of building according to Bauhaus precepts as well as collaborating with local industry on product design. The result was a revolutionary complex of school, student accommodation and workshops built in record time (one year) that embodied the new industrial aesthetics. I was totally entranced by it and by its endless innovative details. These folding chairs by Marcel Breuer beneath a wall-hung radiator are just one example, while another is the multiple windows which can be opened simultaneously using a winder. 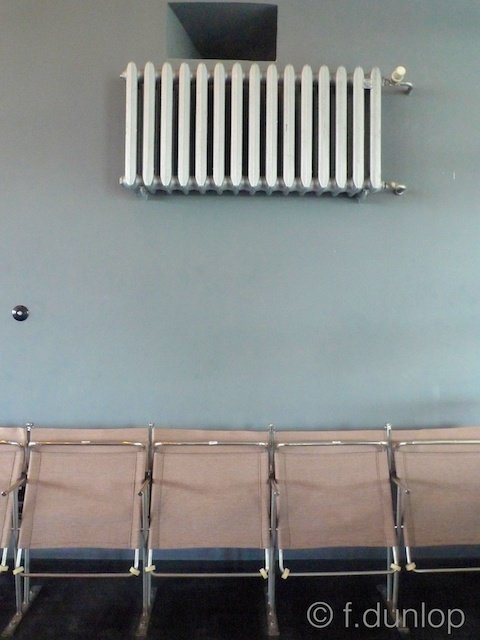 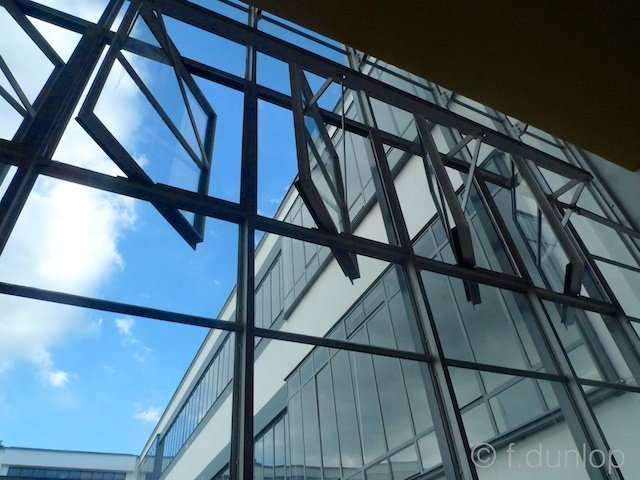 A short walk away, the Master houses built for the teachers in what was once a pine-forest were just as impressive. Brilliantly conceived, each building contained two elegant homes, interlocking yet giving total privacy. I was really moved to visit the house where old pals Paul Klee and Wassily Kandinsky had lived and worked side by side, each one individualising his space with colour details, though Kandinsky’s black dining-room was, hardly surprising, not to last. What a privilege for them and how tragic that this creative idyll had to end in 1932 due to Nazi pressure. 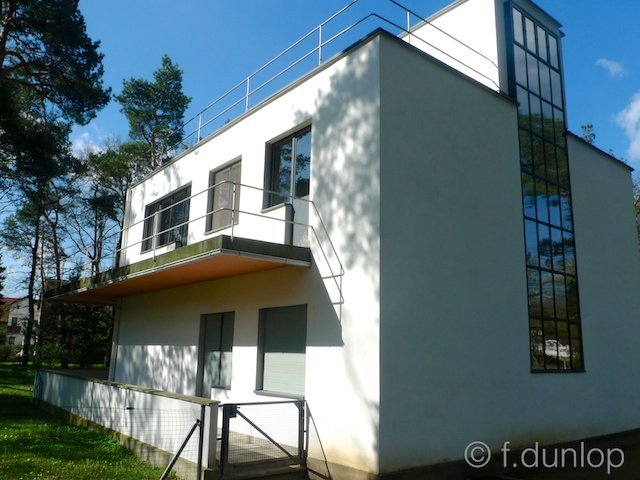 It’s incredible to think that in the 1920s these houses were exceptional and controversial; today they look totally familiar, having been copied again and again. Gropius’ own villa (subsequently lived in by Mies Van der Rohe when he took over as director in 1930) was destroyed by Allied bombing during the Second World War, then built over during the Communist era with a typical, style-less bungalow. Today the authorities have razed that aberration to the ground and are reconstructing the original.

Much of the rest of Dessau is featureless, a bland landscape of post-war housing estates built as workers’ dormitories. There was a good reason: Allied bombing destroyed a horrifying 80% of the urban fabric. Incendiary bombs were part of the lethal mix, and one of these was to burn out the entire interior of the Bauhaus building. 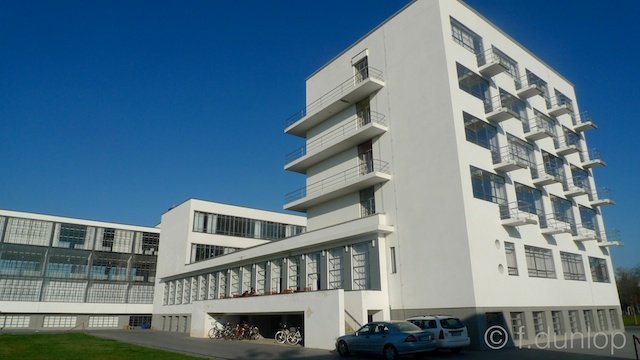 In the last decade or so, architectural archaeology has pieced together the entire building, returning it to its pristine 1926 state, although with occasional guesswork. This reconstruction includes the students’ room where anyone can now stay for 55€ / double. A real snip to sleep in such history! Washing facilities are shared with others on the corridor (four floors, each with six rooms) and there are no lifts, but as recompense you step out onto a little balcony projecting into the void for a dose of vertigo. 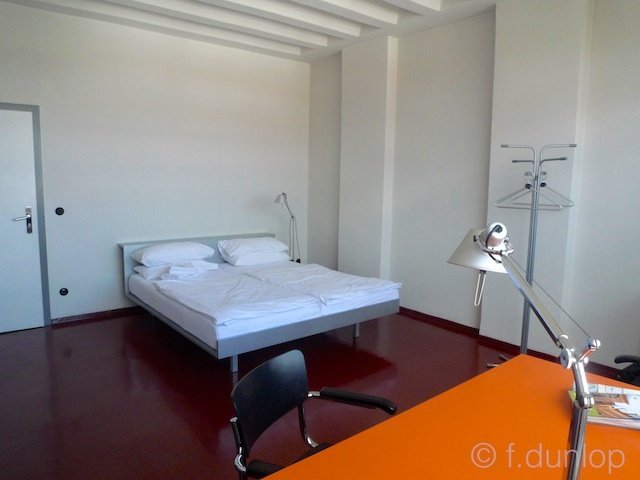 Not all the housing estates are dull though, as Gropius himself set to work on building a utopian garden city, the Toerten Estate. Here two-bedroom houses could be bought on credit for today’s equivalent of 60,000€. We toured the three versions – and gained fantastic insight into the lives and tastes of the East German workers. Not many appreciated Bauhaus windows or doors, and the white walls were often blanketed with wall paper. I loved the bath – a tiled open cube on one side of the kitchen, joined to a coal-fuelled water heater. Below is a pic of the original houses, with their present incarnation behind. Watch the windows change! 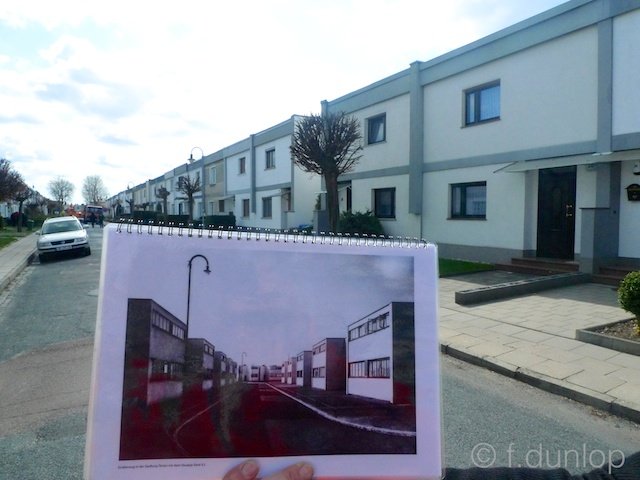 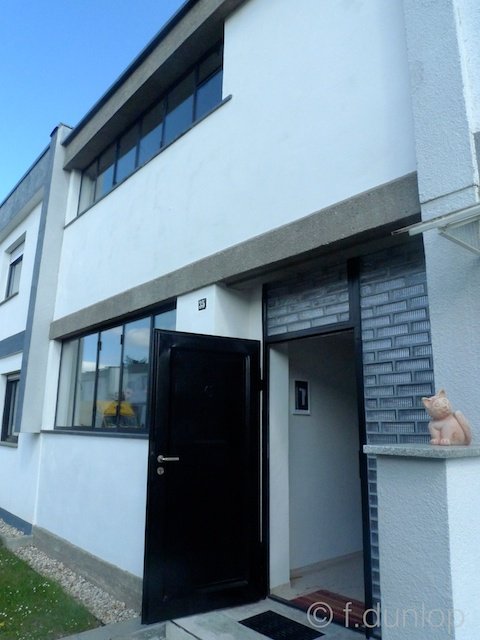 And in the end here is proof that however enlightened a design ethos may be, you can’t stop the input of individual taste – even in the form of a pottery cat.

Read more about Germany’s Bauhaus movement from Weimar to Dessau and Berlin in my Independent article https://www.independent.co.uk/travel/europe/bauhaus-culture-shock-7704210.html