D.H. Lawrence and onto The Peaks

After the grey drizzle of my less than jubilant previous post, now’s time for England at its best. Last week as the temperatures tottered up to the late 20°s we deprived Brits celebrated sizzling blue skies. For three of those days I followed a trail in the middle-north of England which led from D.H. Lawrence’s birthplace, in former coal-mining Nottinghamshire, west over the border into the stunningly bucolic Derbyshire. Bizarrely this area has been branded the Peaks, though for me it’s much more about hidden valleys, clear rushing rivers, limestone outcrops, undulating, emerald-green hills, clusters of contented sheep and a few herds of cattle thrown in. With plenty of foodie interest of course.

Where D.H. Lawrence was born

En route, we visited Lawrence’s childhood house in Eastwood, a town of red brick terraced cottages that is surrounded by surprisingly pastoral landscapes. For a working-class rebel / hero, Lawrence’s house wasn’t that modest and is atmospherically stuffed with furniture and objects of the period (1880s). The master bedroom where the writer was born, the attic where he slept with his brothers, the family kitchen dominated by a huge range (which got its name by fulfilling ‘a range’ of tasks) and bathtub in the corner, the ‘front room’ or parlour for formal socialising, the outhouse for laundry and the privies (WCs) at the back, altogether painted an illuminating picture. The big difference with the Lawrence family was that his mother was a former schoolmistress, therefore literate, whereas his father was an under-educated miner: a socio-cultural gap that not surprisingly brought strife.

In a nod to what was once a local craft, there was exquisite Nottingham lace, while Lawrence’s book titles honoured the edge of each step of the staircase. After walking and talking us through the home, our chirpy guide let us loose on the Lawrence trail through town – not a bad start to our escape from London.

But it was over the border in Derbyshire that my heart really soared. Whenever I head to northern England I’m always amazed at the space – given our overpopulated isle of 60 million inhabitants. Despite the 19th c Industrial Revolution, and despite the 20th c rise of the services industry, we still have huge swaths of utterly unspoilt farmland – increasingly followed up by excellent local fodder. Suddenly we found ourselves driving into a total time-warp, namely an immaculate village called Tissington. Looming over the village green, coach house and pond was a superb Jacobean mansion owned by the FitzHerbert family who’ve lived there since 1609 and it seems still run the village.

So this became a trip back to feudal days, when peppercorn rent was paid to the ‘lord’ by village inhabitants – who now include an effusive young sweetshop owner, Edward, in his re-created 1940s vintage setting. All rather twee and chocolate boxey, but an extraordinary pocket of timelessness. Apparently they even have a members’ only furnishing shop in one wing of the magnificent Hall.

Our final destination was Hartington, in the South Peaks, and what turned out to be an idyllic B&B farmhouse that I found on the net. There was something about their old-fashioned website (not updated for a few years) that appealed to me, but we didn’t realise quite how remote it would be. For over two miles we snaked through the hills along a narrow lane squeezed between dry-stone walls and clouds of cow-parsley – before finally pulling into the farmyard beside a solid 17th c stone farmhouse. Windows were inserted into limestone frames and our raftered attic bedroom with four-poster bed had a tiny knee-high window overlooking the garden. In front, a cow ruminated noisily, sheepdogs yapped and zapped around and behind a row of barns we discovered the farm’s lamb orphanage. Here the chatty farmer, Joe Gibbs, fed them milk. Just beyond, the hillside plunged spectacularly down to the Dove river and the border of the National Park. No other building in sight – utter perfection.

Grassy fields of blossoming clover and buttercups alternated with steep hillsides dotted with huge chunks of limestone, flowering hawthorn trees and thousands of fat sheep; never have I seen such concentrated feeding, ripping up the lush grass all the better to become the rump of lamb that we later devoured in a fabulous gastro-pub, , yet another picture perfect village of the Peaks. Scrubbed wooden tables, candles, jugs of wild flowers, charming service – and delicious organic fodder. Our gluttonous content was completed the next day at a spectacular country house with beautifully landscaped terraced gardens, Haddon Hall .

Sadly for my waistline, it had a lip-smacking restaurant attached. Here my detective work got the name of a local farm supplier Highfield House Farm 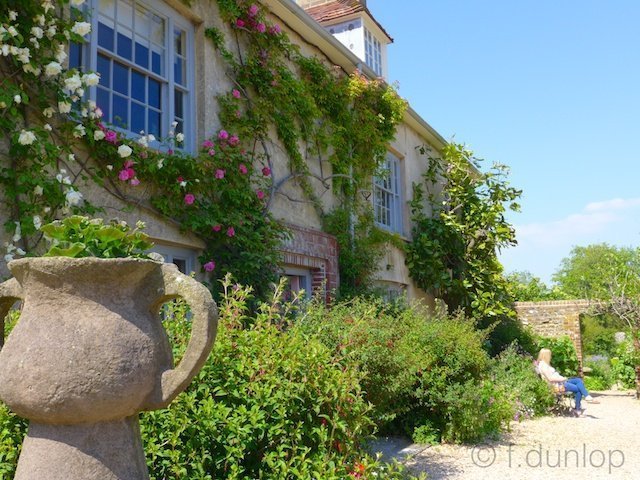