Last night I was lucky enough to indulge in gustatory bliss at Sake No Hana, just one element in Alan Yau’s expanding gastro empire (he kicked off with the moodily brilliant Hakkasan about a decade ago). Of course food critics all pounced on this Japanese emporium the moment it opened its doors over four years ago, not necessarily positively. But it seems things have looked up since, so I was more than happy to try it.

From the very traditional St James’s (Savile Row is just round the corner) you step into a shiny black lobby to be spirited upwards by a vertiginous escalator. All a bit moderne? No way. I loved the aroma of wood – cedar? – that permeated the basement corridors on a side-excursion to the ladies, but even more I loved the divine morsels that were deposited in front of us in the hallowed eating hall above. It’s not cheap (count on close to £100 a head), so draws a well-heeled, cosmopolitan crowd, with Russians and Middle Easterners dominating.

In the pic above you see tables gentle curving round the windows, behind me was an open kitchen-bar, in between were well spaced tables, partitions and a flock of black-clad waiters. Altogether there was a good buzz once it filled up after 9pm. Problem was, they weren’t prepared for the big rush and our dishes came sporadically with huge gaps in between. This got us through a divine bottle of Pouilly Fumé rather too quickly, but who cared. Luckily the waiters (Burmese, Italian, Lithuanian) couldn’t have been more charming, or apologetic – although the French maitre d’ looked totally ineffectual in a gangly, Monty Python-esque kind of way. They could also be better informed – when we asked one waiter about what went into a delicious sour, vinegary dressing he suggested olive oil. Ah ha – very Japanese!

But when the food arrived – dans le désordre – it was exquisite. Whet your appetite with these: to kick off a five seaweed salad, possibly the least exciting of all, followed with far greater impact by a soft-shell crab salad (first pic above) then quail with shichimi pepper (no pic – sorry – I was too hungry at that point) and to clean the palate, sashimi goshu – above, that’s five kinds of raw fish with pickled courgette in dainty little curls at each end. Then came grilled black cod in a mandarin sauce – now that, the slowest dish to arrive, proved incredibly subtle with just a hint of mandarin and an emulsioned texture that made it slip down – rather quickly. Beautiful.

Succulent strips of well-hung beef grilled with tiny fungi in a cast iron dish were more substantial yet still refined. Finally the coup de grace – a delicate green tea cake with a dollop of ice-cream before we staggered out into the London night. All supremely subtle, perfectly presented and absolutely lip-smacking – delays or not. 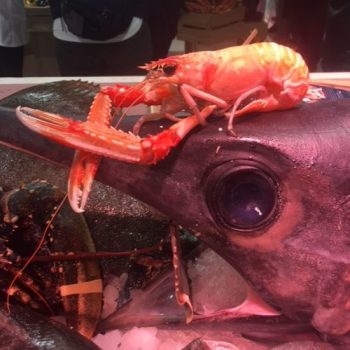