So there I was, back in the Basque country, heading for my favourite Vasco city, San Sebastian, aka Donostia. On my last visit in April the sun blazed, this time (a couple of weeks ago) I experienced a key feature of this individualistic land: drizzle. Or, in that strange forked tongue unlike any other: zirimiri, a version of the Irish ‘soft’. Even the seagulls looked elsewhere.

Following big umbrellas and even bigger puddles, I stopped en route to hear a stirring rendition of a Basque song, backed by emotional choruses from gathered locals – luckily sheltered by the arcades of the Plaza de la Constitucion. It was the day before the regional elections, so maybe these soulful sounds helped swing the vote – which brought a resounding victory for the Basque parties. 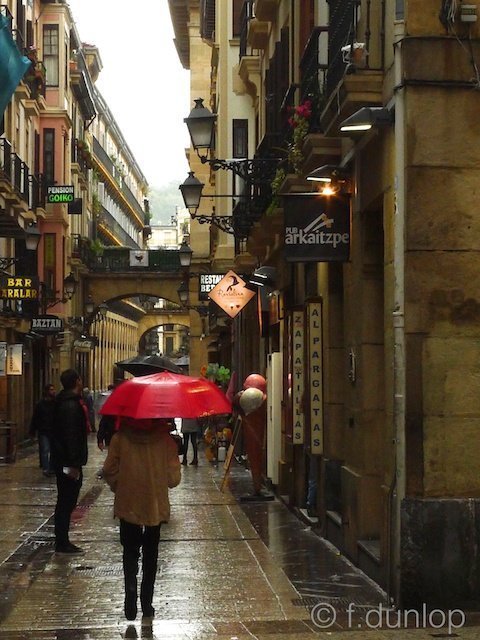 Then it was onto more serious stuff – the pintxo trail. In the two days ahead of me, I wanted to establish my Top 5 bars (tricky, when there are supposedly 150 of them and oh so many excellent ones) as well as add new addresses to my lengthening list. But first I had to check the irresistible A Fuego Negro(calle 31 de Agosto, 31), a sharp avant garde gastro-bar showered with rave reviews but which left me rather underwhelmed last time. 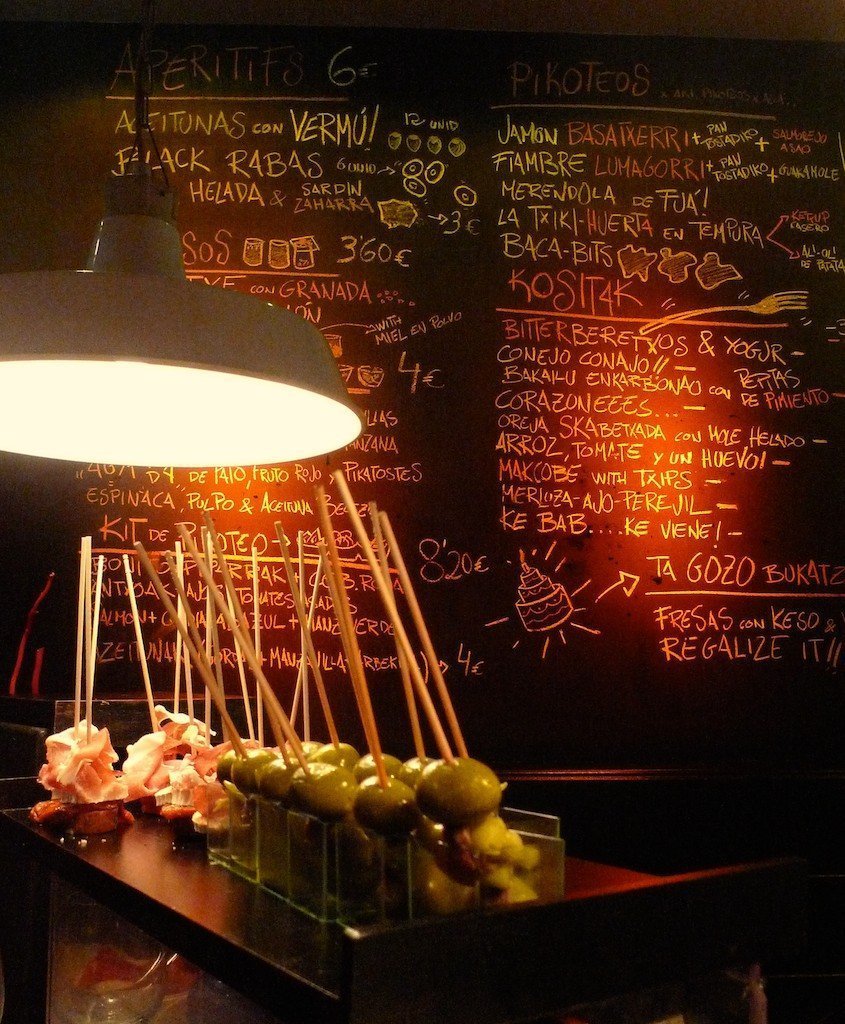 To soak up the txakoli (that light, sparkling white wine from coastal vineyards) rather than the rain, I ordered a gently panfried hunk of merluza (hake) on a bed of fried garlic and parsley – a wonderful balance of textures and flavours.

For palate-cleansing, I demolished a particularly juicy gilda (as above, more on that morsel later), before finishing with a sublime tigreton (below) – a puree of tomato and mussels topped with a béchamel foam and sprinkling of pork scratchings. A dreamy combination that just slipped down. Two txakolis and these three gustatory pearls barely topped 12 euros: I was conquered. The bar was buzzing, prams and all, Japanese, Americans, Brits and Basques all fighting to order these elegant concoctions chalked up on a board. The glowing reputation of A Fuego Negro is well deserved and it’s now firmly on my list.

Next came a far more traditional old favourite: La Viña (c/ 31 de Agosto 3) – above. It is classic territory for amazingly good value raciones, friendly and you can usually squeeze in at the counter. Come too late though and the platters will have been emptied by ravenous locals. Here it was boquerones – marinated anchovies with La Viña’s full on garlic and olive oil dressing, rapidly followed by some particularly succulent pink prawns. Crunch. 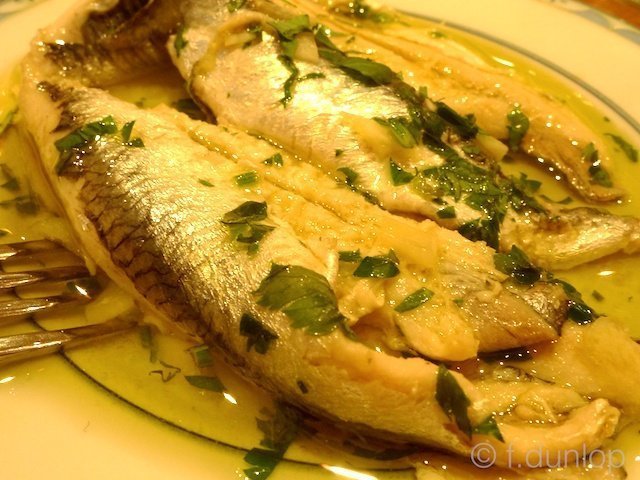 Next door, at the equally good but less welcoming La Cepa, it was time for more anchovy comparing and contrasting, as in this little morsel on thin, crunchy toast.

Finally, new territory. Borda Berri (c/ Fermin Calbeton 12) is a place I’ve wanted to test for a while, but it is always packed. One reason for my interest is that over a decade ago the chef, Iñaki Gulin, co-founded the highly rated Cuchara de San Telmo which, at that time, was creating ground-breaking stuff that earned the bar a slot in my book, New Tapas. It still is, but the prices are pretty stratospheric. Anyway, back to 2012 and the relentless zirimiri, this time with two co-testers, we found ourselves well placed at the bar for three glasses of txakoli served with aplomb but no smile by a chap in shorts.

Rice is one of my weaknesses, whatever part of the planet I’m on, so when arroz bamba con txipiron blinked at me from the blackboard, one of 20 odd pintxos of the day, my choice was made – the squid risotto proved creamily satisfying. The idea of Garlic soup with pig’s ear left me distinctly cold, but my companion’s Queso de cabra con ciruela (a delicate little pastry boat of goat’s cheese with a plum coulis looked and apparently was exquisitely balanced. 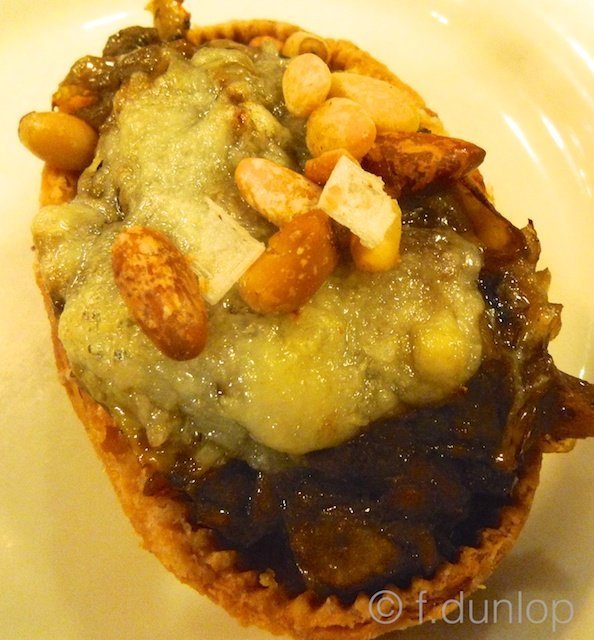 Pastries are in fact making inroads on the pintxo counters – a welcome substitute for the stodgy slices of bread that have dominated counters for years, despite their toppings evolving. So at the slick Casa Urola (calle Fermin Calbeton 20) I couldn’t resist another seductive little puff pastry (above), this time filled with mushrooms, cheese and pine-nuts; my companion’s one of crab and mayonnaise vanished in nanoseconds.

Then it was gilda time again. I’ll explain. These bastions of Basque bars contain three elements: fat Cantabrian anchovies, plump juicy olives and pickled guindilla peppers. Urban legend goes that the name came from the film Gilda starring Rita Hayworth, released in 1946. That year this funky little creature on a cocktail stick was created and baptised, because it too was sexy, salty and a bit spicy. Voila, so the tale goes. Who knows if it’s true, but whatever bar you happen to be in, you’re bound to find one.

So – the Top 5? who to select…drum-roll….
A Fuego Negro
Borda Berri
La Viña
Gandarias (see previous post https://www.fionadunlop.com/blog/2012/05/08/pintxo-notes-from-san-sebastian/)
Casa Urola? La Cuchara de San Telmo? or perhaps the acclaimed Bar Zeruko which I have yet to try? Not sure yet, so a great excuse to return! 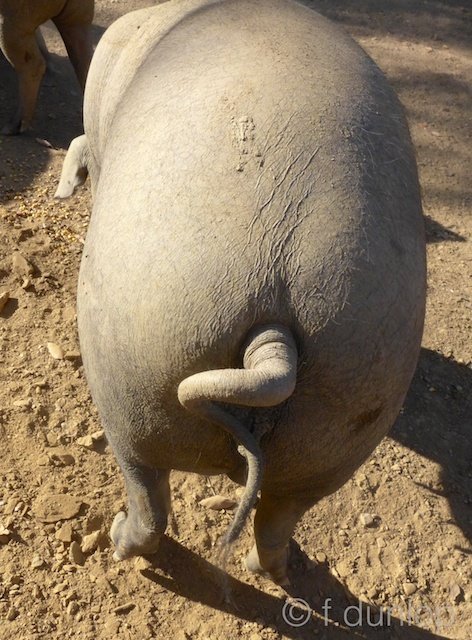