Taroudant – a small town wedged between the Atlas mountains and the Sahara desert, dramatically encircled by 7 km of lofty ramparts, is often dubbed a mini-Marrakesh. Well I can safely say that’s not the case, but it does have a lot of charm and far fewer touts than Marrakesh, a huge bonus. Even better, while passing through last week en route for the Sahara I found a manmade paradise just outside its walls – Dar Al Hossoun. 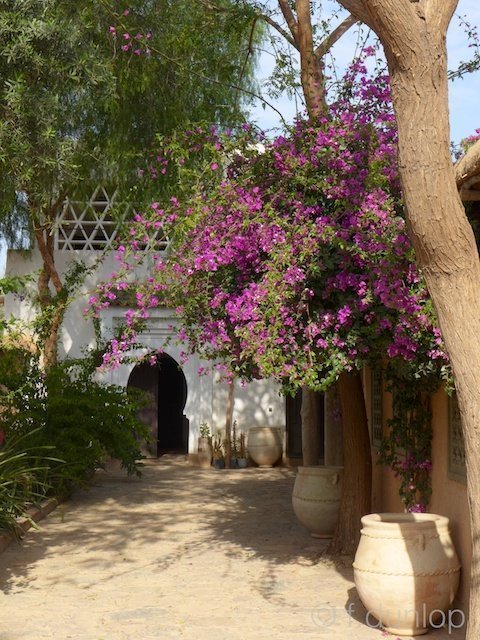 Entering this garden lodge from a dirt road skirting a deeply rutted gorge and olive groves is like stepping inside a mirage. An astonishing oasis of hundreds of plant varieties combines in a dazzling, maze-like tangle of colour and foliage. Succulents abound in this arid region, but are joined by papaya and banana palms, euphorbia, water-lilies, Mediterranean flowers like plumbago and bougainvillea, hibiscus, wild grasses and white roses. The property feels gigantic, as the 6500 sq metres are cleverly divided into interlocking spaces, including a sunken garden, all encircled by high mud-brick walls, just one of many laudable nods to vernacular ‘green’ architecture and sustainability. 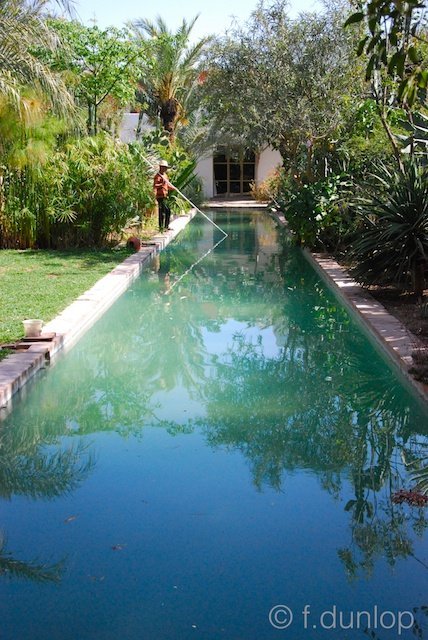 Slicing through the centre is a 30-metre lap-pool inspired by the Court of the Myrtles in the Alhambra – a ribbon of light reflecting the cobalt sky above. Enveloped in this sensual delight, I sleep deeply in the garden suite, feeling perfectly safe with my doors open to the breeze from a private walled orchard – this is the kind of place where there’s no need to lock your door day or night. Here’s a typical room (not mine – too messy to photograph) and a rooftop one below that. 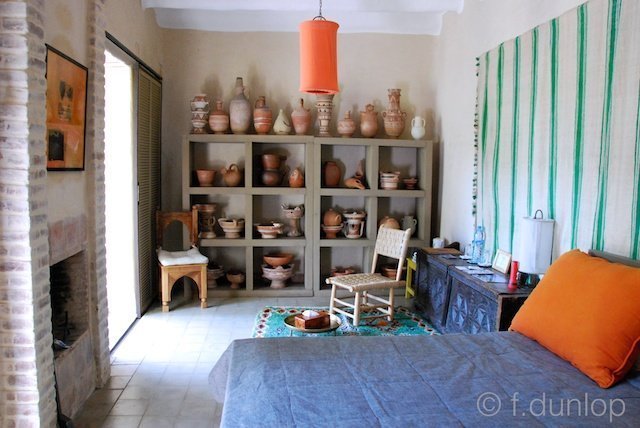 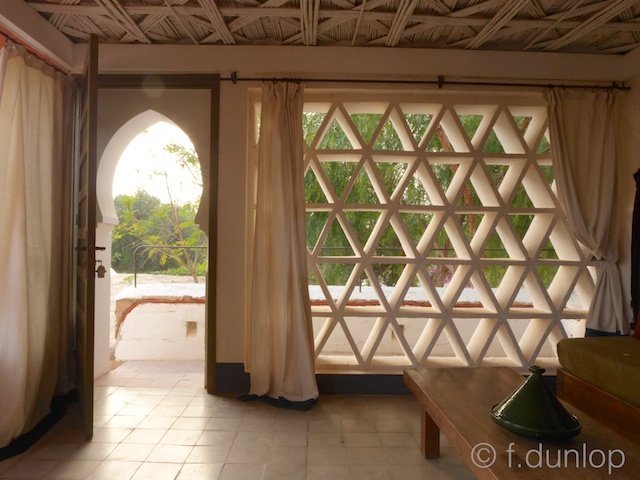 All this is thanks to two hugely talented French landscape designers, Arnaud Maurieres and Eric Ossart (see maurieres-ossart.com), who planted the gardens of Dar Al Hossoun in 2007-10, as well as designed the interiors, creating a stunning balance of contemporary design with choice Moroccan artisanat, from clay pots to luminous milky tiles, soft Berber rugs and embossed teapots. High quality ethnic chic I’d say, without the Moorish overload. The new owners, Ollivier and Thierry, seem equally dedicated to the environment, as well as having a penchant for pets – from a fleet of squawky peacocks to four dogs and various cats, and that’s without counting the resident frogs and geckos.

For a blissful hour or so (yes, this was work) I experienced this sybarite’s delight ensconced on a sun-bed, a green-eyed black cat in my lap, a white hisbiscus tickling my ear, and a fresh mint-tea by my side courtesy of the charming manager, Majid. Even breakfast turned into an exercise in homemade jam-tasting, from fig to citron, clementine, bitter orange and a delicious local curiosity, amllo, a superior, liquid version of peanut butter made with honey and said to be aphrodisiac. That was in the orange orchard, while in the evening I sipped an aperitif looking out over the pool and garden. In inside-outside architectural terms, Dar Al-Hossoun is Barragan (Mexico) meets Geoffrey Bawa (Sri Lanka). 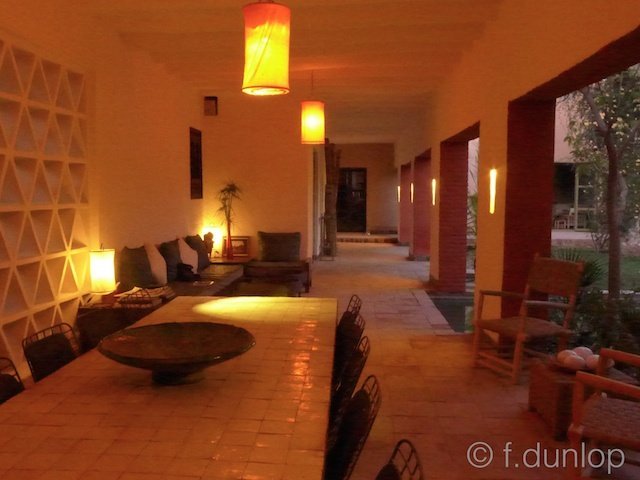 I first went to Morocco in the mid 1970s (now that’s telling…), motoring from Montpellier in France south through Spain, across the Strait to Ceuta, then down through the Rif mountains. Of course naive as we students were, we travelled in a 2CV, unaware of the height and appalling roads of the mountains and of the true distance. No Google-maps in those days. But sometimes that kind of innocence pays off, and we eventually made it to Essaouira on the coast, sleeping in Berber homes in the mountains en route.

Since then I’ve been back at least a dozen times, mainly to Fez, Marrakesh and Tangier, but it’s over 20 years since I’ve been to the deep south, so a return to Taroudant intrigued me. During the day I threaded my way through the crammed souk, craftily managing only to buy babouches, dodged moth-eaten donkeys and cyclists then collapsed in a local café for lunch. When I lost my way in the kasbah, I asked a couple of teenagers for directions and, with typical Moroccan hospitality, they walked me back through the dusty streets to the gateway. In the end, it felt like little has changed – despite the presence of nearly 500 foreign residents in Taroudant. Maybe that’s its secret: it’s understated and discreet, although if you find your way to Dar Al-Hossoun, your soul will get a new lease of life, I promise. 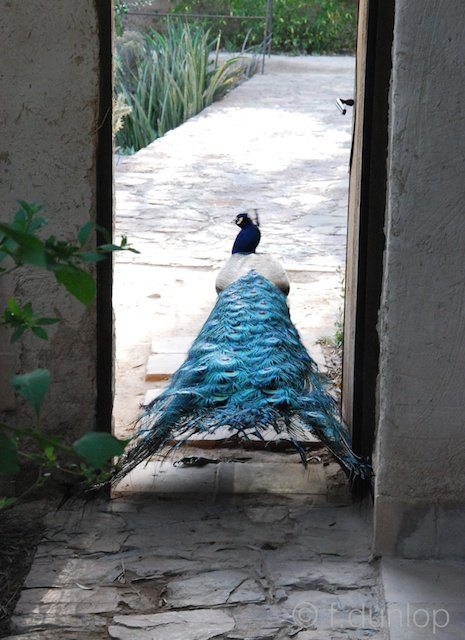