Morocco gets endless coverage in the travel press, but this often focuses on glitzy riads in Marrakesh, Essaouira or Fez. Push the boat out and you might reach Tangier (see this earlier post ). These magical guesthouses which so cleverly blend Moroccan craftwork with Western style, are generally foreign-owned. Nothing wrong with that, and I love staying in them, but on my recent foray to the deep south, I was delighted to discover a couple of locally-owned guesthouses in stunning rural ksar or kasbah (castles or fortified towns). 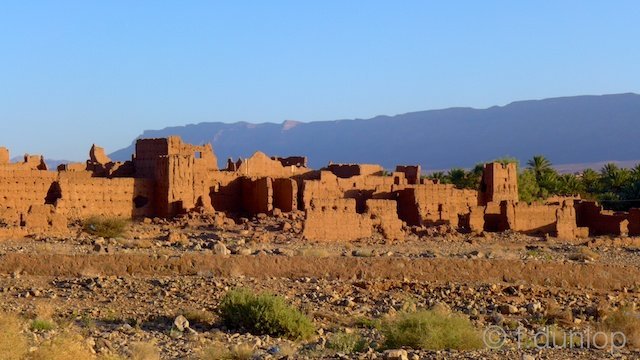 Hard to get more authentic – or price-conscious, because you stay in a castle with an inimitable Berber look and pay less than 30 euros a night. This includes a tasty homemade dinner and generous breakfast. No alcohol mind you – but that’s Morocco. It’s a fantastic deal that is little known as these places don’t generate huge profits – so have no budget for advertising or PR campaigns. The scenery is spectacular, too. 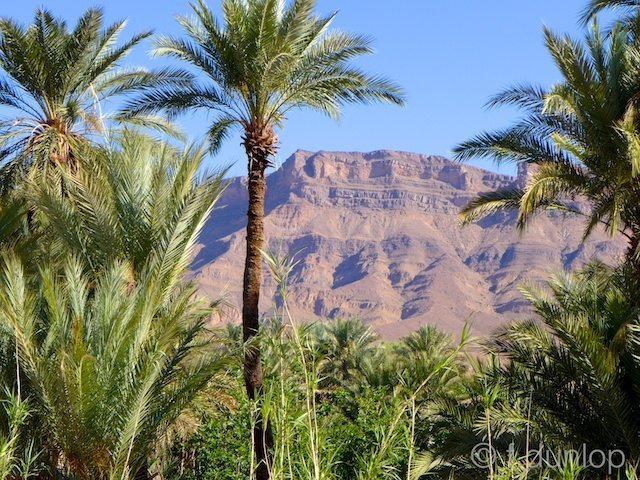 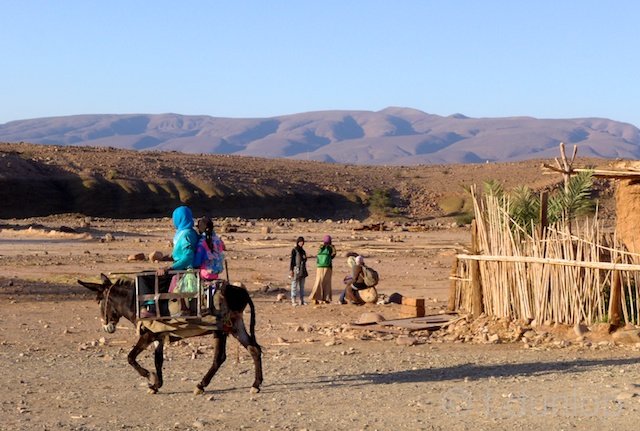 The first kasbah hotel I found was in the spectacular and dreamy Draa Valley, where a long ribbon of a river edged by a palm-grove – that extends for about 200km – is peppered with semi-ruined castles and labyrinthine villages of rammed earth. Half the dates of Morocco are produced in this palm-grove, eminently visible in the market at Agdz a few kilometres to the north where hundreds of boxes were piled up in anticipation of Ramadan (this year in July). 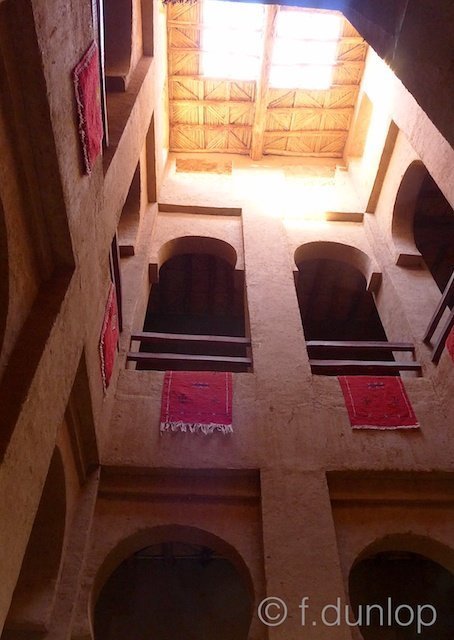 The 18th century Kasbah Ouled Othmane is now in the hands of the fifth generation of the former caid’s (local ruler) family. Abdir Majid, one of eight siblings, is a charming man who takes huge pride in running his five-year old hotel. He explained how he has been helped in the project by a Frenchman who invests and advises – and is also a faithful visitor to the region, so no mere money-man. This year saw wi fi arrive in every room and a couple of solar panels installed on the roof – not exactly aesthetic but a great example to neighbours. 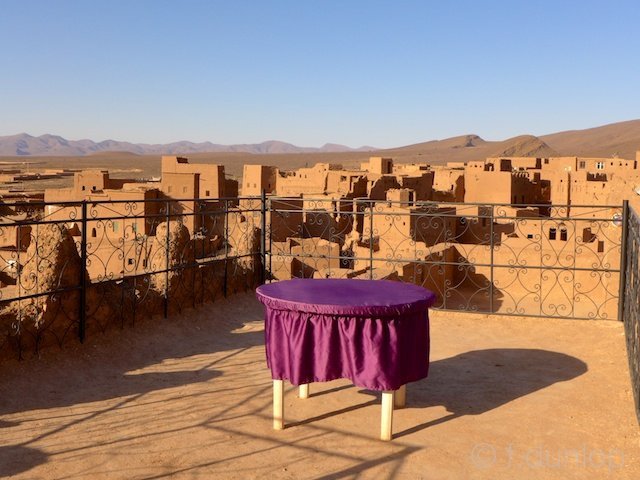 Sweeping views from the roof terrace (above) take in the intricate lay-out of the old village and the tufty green fronds of the palm-grove against the stark escarpment – altogether giving a sense of endless space beneath a deep cobalt-blue sky. Breakfast is served on the roof – not a bad way to start the day. 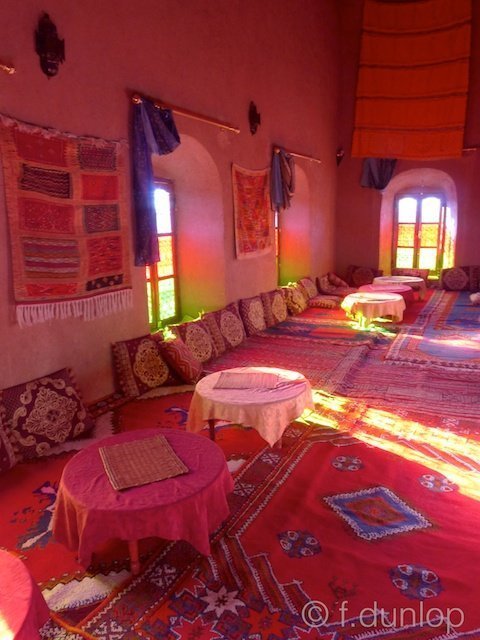 12 Berber-style rooms and one suite are packed with vivid local colour and cosiness, from rugs to curtains and bedspreads, and all have their own little bathroom carved out of a corner. Rooms remain cool thanks to thick walls and small windows. It’s a magnificent building on two lofty floors, with soaring arches around a central patio (see pic further up), beaten earth floors, a vast technicolour dining-room (above) and even a small pool. At 300 dirhams (about 28 euros) a night for half board – what more can I say other than go there? www.kasbahdumaroc.com 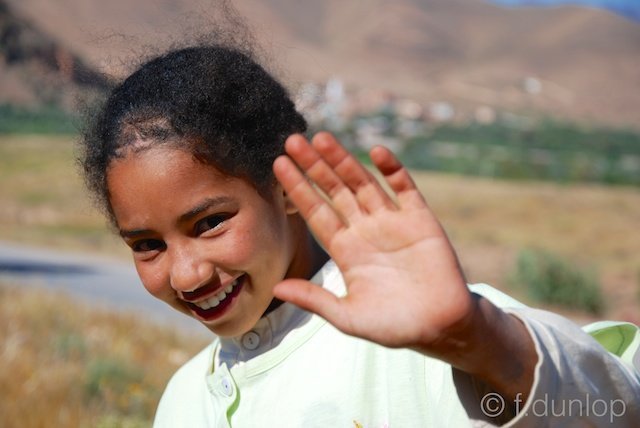 My second experience was in Taliouine, about 1000m up in the Anti-Atlas mountains, so distinctly cooler but no less dramatic in terms of landscape or architecture.

In this case the in-house ksar family was more visible, and more extended. An ageing but active Mama sloped past carrying a huge bundle of herbs and chasing a herd of sheep, two adult sisters popped in and out of the kitchen, while Omar and Said, their two brothers, supervised the trekking and guesthouse business together with Omar’s French wife, Aude. Her two young sons played happily (who wouldn’t be, surrounded by such cosseting relatives?), various dogs and cats came and went and a braying donkey was dragged into its stall at nightfall.

Below is my meatball tagine dinner served outside in a courtyard that became chiller by the minute – but the meal proved a delectable warm-up before snuggling up in my bright yellow room. 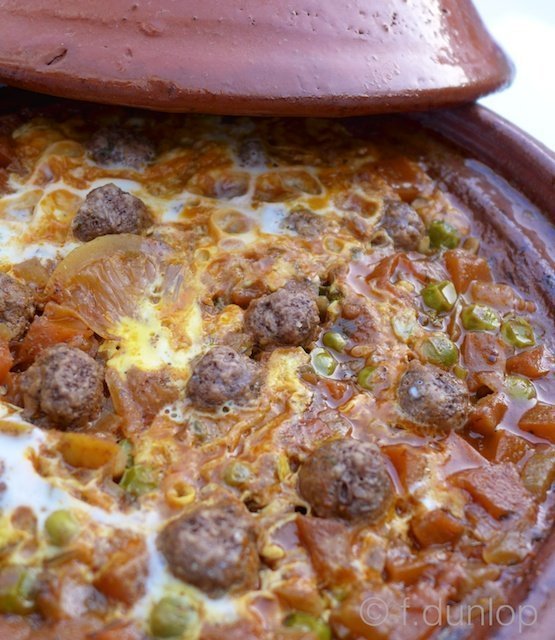 Each of the guest-house’s four rooms (for the moment only one is en-suite) open onto a large flowery courtyard but unlike Ouled Othmane in the Draa, the main castle is off-limits due to its perilously crumbling walls. You get a good view of its scale from the courtyard, and viewed from the surrounding hills it really looks the part. 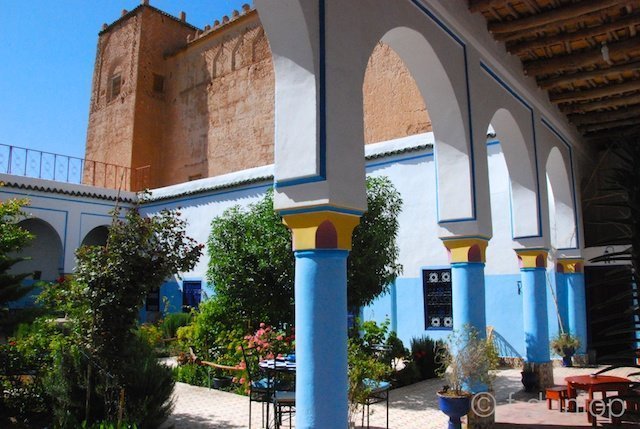 Taliouine is a friendly, low-key centre of saffron-growing that makes a brilliant base for exploring the little known Anti-Atlas region. Pricewise the kasbah is also a snip as half-board in the en-suite room is 25 euros, using the shared facilities it’s only 20 €. www.escalerando.com

For more on southern Morocco, places to stay and a tortuous road-trip, read my article in the Independent here

To end, here’s a Moroccan mystery. As I walked through the hills around Taliouine, taking pics and waiting for that optimum late-afternoon light, I reveled in the remoteness and absence of people, though sheep were of course omnipresent. Then, one back home and looking at my pics on the computer, out popped a little man looking straight at me! See him here in the pic below, second arch from left. Who was he? Where did he come from? where did he go? 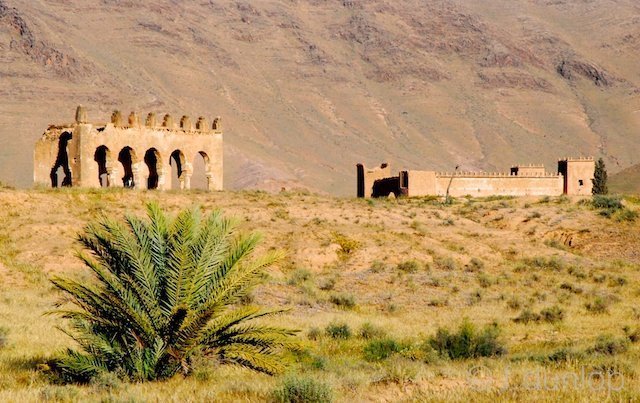