The pic below shows Cordoba’s deserted streets a few days ago at around 5pm and 42° – only mad dogs & one English woman, me, ventured out in the searing heat. However it’s not only temperatures that are hotting up there right now. Later, when it was only marginally cooler, I staggered through the former Moorish and Jewish labyrinth to reach the Mercado Victoria – the latest hip venue in Cordoba’s increasingly tempting gastro offerings. 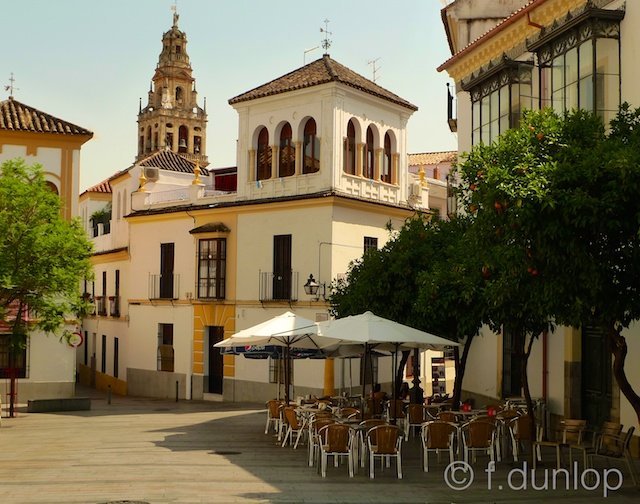 This I eventually reached after two energising halts, one for a cooling granizado and one for a chilled fino.When I stepped inside this new food and tapas-hall, it was like a breath of fresh air – in fact a blast of cool AIR-CONDITIONING! I never thought I’d say or write that. Climate aside, this venture is once more proof that Cordoba is imprinting itself on Spain’s foodie map. I’ve written before about its creative tapas bars and the wealth of quality produce from the region, whether sweet Iberian ham from Los Pedroches, award-winning olive oil or excellent fortified wines from Montilla-Moriles, but now a lot of this seems have come together under the soaring roof of the Mercado Victoria.

It’s a mini-Cordoban version of Madrid’s successfully renovated Mercado San Miguel, with the added bonus of Andalucian alegria. Carved out of a striking wrought-iron fairground building which has been standing in the Jardines de la Victoria since 1877, the food-hall turned out to have untold treasures – over 30 food-stands to be precise. After kicking off with a cooling glass of strawberry gazpacho (which here is treated like a drink, not a soup, and La Gazpachera did a fine job of mixing the fruit with pink cava), I discovered cured sheeps cheese, as good as any Manchego, from the Los Pedroches hills north of Cordoba, helped down by a glass of robust red wine from Montilla-Moriles.

Then it was onto a mini-burger of organic Wagyu beef, a perfect bite-sized tapa dowsed in a hot chilli sauce, while a grilled artisan sausage filled yet another gap. Here are the creators of said sausage – one obviously hungrier than the other. So look out for Barbancho Gourmet, a company set up at the Mercado after its owner, Felipe Barbancho, worked for nearly a decade in the Basque country, notably with Martin Berasategui at Lasarte.

Not least came the brilliant twists on Cordoba’s great classic (and my secret passion – or for followers of this blog, not so secret) – salmorejo. These have been devised by a charismatic young Cordoban chef, Juan José Ruiz, who’s coined a clever brand-name – La Salmoreteca – to encompass his multi-coloured, multi-flavoured range. His enthusiasm for the chilled, dense soup (a thicker version of gazpacho, normally made from ripe tomatoes, breadcrumbs, garlic, extra virgin olive oil and a dash of PX vinegar, then served with chopped boiled egg and jamon) is infectious, particularly when they’re lined up in front of you for sampling. 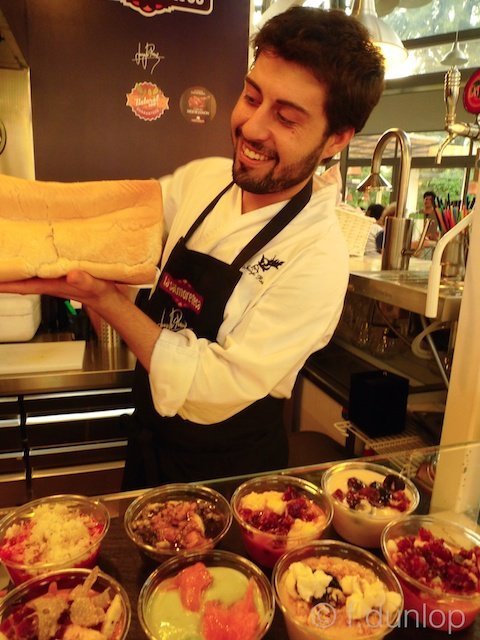 According to Juan José, salmorejo is a concept, not a recipe, so is open to interpretation. One element he insists on is the telera bread of his city – a square white ‘tin’ just like the classic English loaf for cucumber sandwiches. Here Juan José squishes the loaf to prove its consistency while showing off eight versions of salmorejo, two of which are made with traditional ingredients, one hand-mixed, the other whizzed in a blender. And I’ll tell you now that in a blind tasting I’d immediately choose the hand-mixed consistency. But precedent stopped there, as other versions involved a mushroom cream from the nearby mountains of the Subbética topped with shaved truffle, another from the sea mixing seaweed, squid ink and pickled mussels, another of beetroot with pine-nuts and goat’s cheese (not my favourite), then corn, popcorn and herring caviar and yet another of avocado topped with smoked salmon. Weird, wonderful and mostly a triumph. 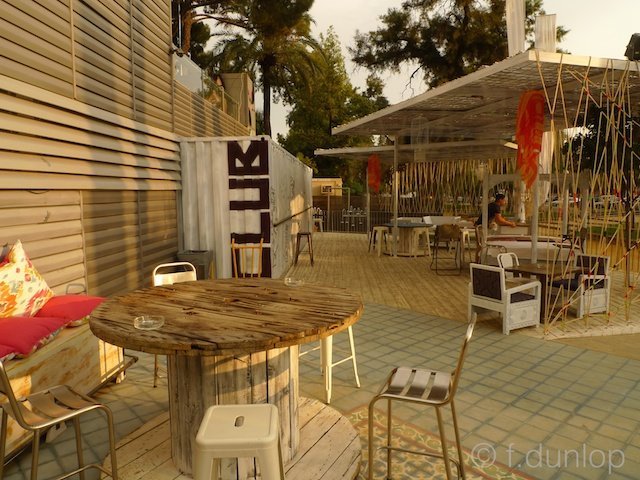 By 10pm the place was packed, some people roaming wildly, their taste-buds pulled in all directions, others sticking firmly to what they knew and liked. The exterior also managed to draw clients to a fun and funky bar with mismatched and recycled furniture and four-poster day-beds, with drinks served from a container, plus welcome squirts of cooling mist – even close to midnight the heat was intense. Above loomed palm-trees, and the scent of jasmine intensified with the advancing night. When I spotted people methodically picking flowers, I was told that jasmine buds keep mosquitoes at bay. Well, perhaps better that than wasting basil, which the Spanish never eat, only regarding it as an insect repellent. Could it enter the next salmorejo?

One stand that was less successful was that of the local chef Kisko Garcia, of Choco. Sometimes it doesn’t pay to be too clever, and in fact his rows of kilner jars of mysterious molecular fare with no defining label remained unloved and unsold. Ferran Adria he is not. 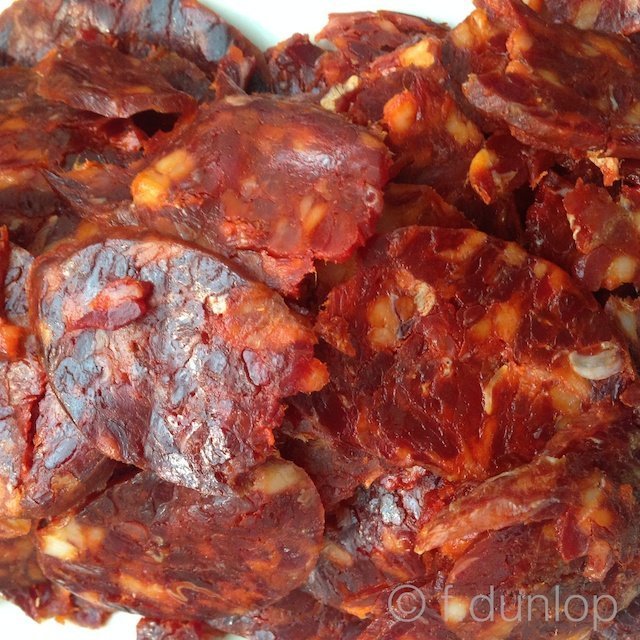 In contrast, things were booming at Covap‘s stand of perfectly carved jamon iberico and other porcine delights (read about their source here), at an oyster stand where the molluscs couldn’t be shucked fast enough and, no surprise, at an artisan ice-cream parlour. The good news too is that the Mercado Victoria has created some 100 jobs in a region which suffers from 35% unemployment. Altogether it was a delicious experience and presented a far more enticing setting than the coolest place I’d found earlier in the day: the Arab baths hidden beneath the Royal Palace. But maybe their time will come too – Moorish tapas anyone? 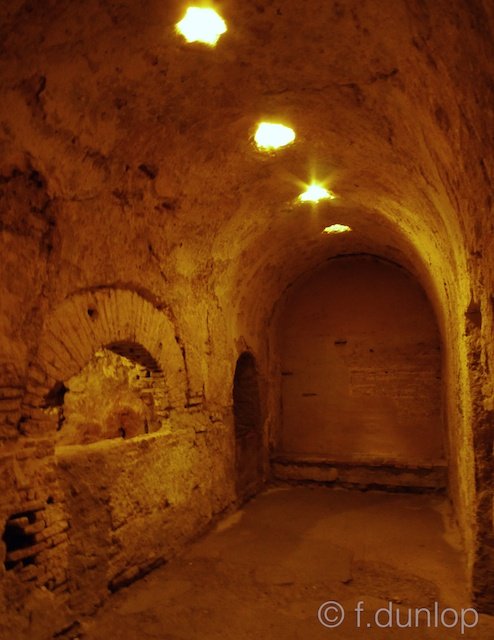