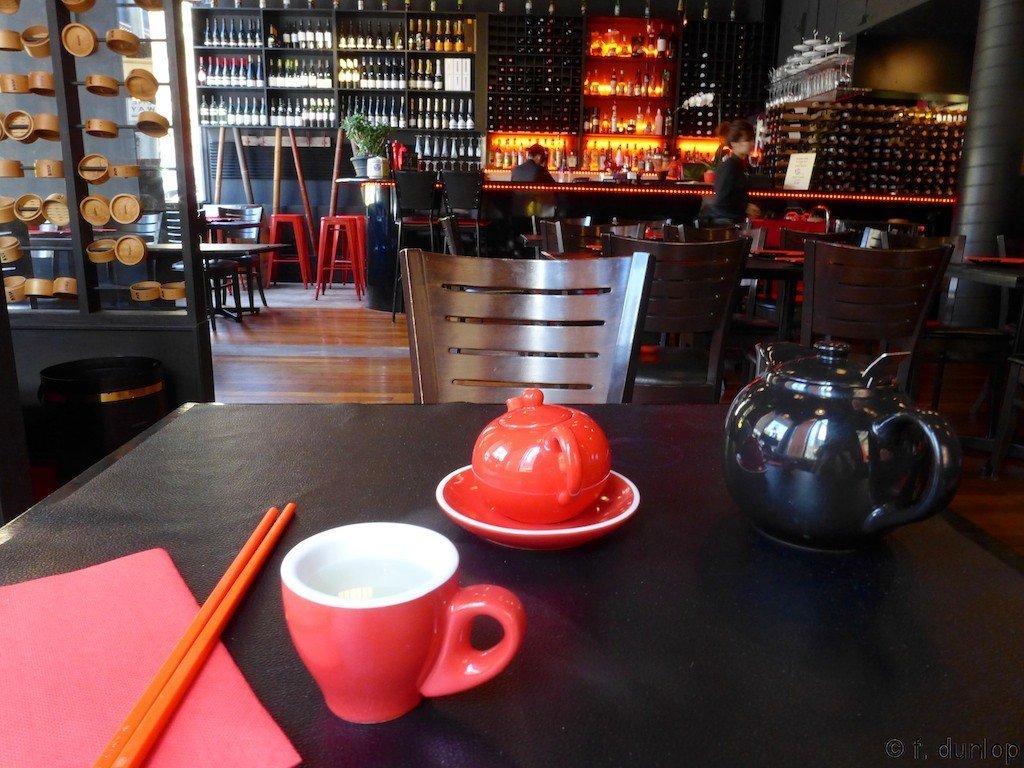 Who would have guessed it, the far-flung Aussie city of Melbourne claims the longest continuous Chinese settlement in the Western World. I certainly became convinced a week or so ago while staying in the heart of said Chinatown, in Little Bourke Street. Exit the cossetting yet funky Ovolo hotel, look left, and there’s a sea of ideograms, banners and red lanterns, with a few pagoda-style arches thrown in. Not least, the aromas matched the view, 24/7. I was in gastro-heaven, even more so when it turned out my visit coincided with the Asian Food Festival – so Spring rolls (according to the downunder seasons at least), pedicabs and all.

Here’s an alarmed-looking deputy mayoress, minutes after inaugurating the fest, about to be peddled away by the Malay Consul and watched by Danny Doon, President of the Chinatown association, on the right. In fact, like Chinatowns around the globe, Asian food encompasses many other cuisines of the Orient, from Malaysian to Japanese tapas – something I chose NOT to sample. I’ll stick with sashimi or nigiri thanks. There’s even a Gaylord, offspring of that tired old Delhi classic on Connaught Place – possibly not the best bet for dinner here.

The history of this vintage Chinatown goes way back to gold-rush days in the 1850s, when a burgeoning community of traders, lodgings and clubs set up in Little Bourke Street to service boatloads of immigrants from Hong Kong flocking to the gold-fields. A peak in fortunes came in the 1880s during Melbourne’s boom period, but by the early 1900s the iniquitous ‘white Australia’ policy had killed off further Chinese immigration and hence business. Today though it all feels very bouncy, a bit like Australia’s economy and unlike its often uncouth politics (politicians?).

This ornate building on Little Bourke St itself is a relic of the Victorian good times, built in ‘high boom style’ by Sun Kum Lee, a wealthy Chinese merchant, as his trading HQ. I dived inside the Shanghai Dumpling House on my first evening, having arrived late and starving, thinking a substantial soup would be just the ticket. The dim sum weren’t the best I’ve tasted but I loved the atmosphere of the multi-storeyed restaurant, heaving with hipsters and also, unlike London’s Gerrard Street, blessed with helpful waitresses. None of that snappy ‘communication’ or slapping of dishes on the table. Here it was sweet efficiency.

For lunch next day my taste buds fared far better in a sleek little place round the corner, in one of the incredible laneways that Melbourne’s historic centre abounds in. Just like Beijing’s hutong in fact. This restaurant was the HuTong Dumpling Bar, where I coughed and spluttered my way through a succulent bowl of wonton with muscular chilli oil (pic above). At one point the waiter came over to suggest that next time I ask for less chilli. No way! I gasped, this is perfection! And it truly was, doubly so as the lady who’d actually made the dumplings so dexterously, was smiling sympathetically from behind a glass partition, flanked by mountains of bamboo steamers. If you’re in the area, go there (14 Market Lane) – and indulge. You won’t regret it. There’s another branch in Prahran if you’re out that way, but I think you’d lose something by not being in Chinatown.

Another place I couldn’t resist for its zingy black and red style was on the corner of Exhibition St, the Yum Cha Café – here it is, jasmine tea and all. Then, sadly, I had to go and catch that plane.