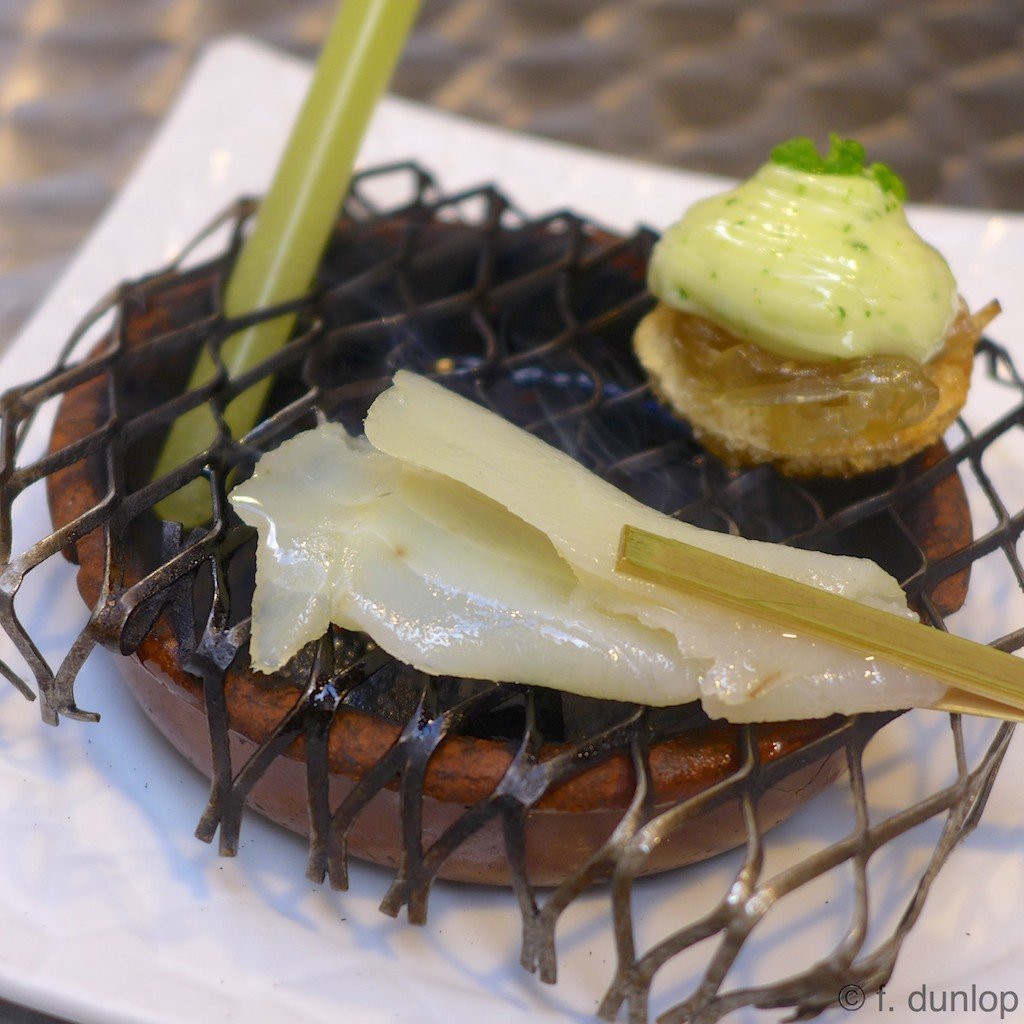 I’ve mentioned Bar Zeruko before, but here’s an addendum to my ongoing pintxos (aka Basque tapas) investigation in San Sebastian. It’s over 12 years since I wrote New Tapas in which I featured the (then) newly opened, ground-breaking Cuchara de San Telmo which subsequently shot to fame. You can read my far more recent reports on San Sebastian’s gastro-delights in this blog as well as a lengthier round-up of avant-garde bars which I wrote for the Guardian. A couple of weeks ago I was back, on this visit with time for a detailed appraisal of Bar Zeruko, without forgetting old favourites like Borda Berri, Casa Gandarias and A Fuego Negro.

Now Bar Zeruko has always been a bit of a mystery to me, and I’ve only ever dropped in briefly. Look at their website – no names of owner or chef, though plenty of drool-inspiring pics of their quirky creations which have scooped up prizes over the last six years. Basque modesty perhaps? In contrast, Zeruko’s counter was far from restrained, metaphorically trembling under gustatory tiers of weird and wonderful bites – a pictorial pintxo theatre set in fact, juxtaposing forms, sizes and colour, making most ingredients a guessing-game.

We arrived smartly before the manic Saturday lunchtime rush-hour, all the better for choice, space and attention. I didn’t spot the youthful owner, Joxean Calvo, but his cooks were clearly slaving away in the background, and the efficient lady at the bar turned out to be his sister, Marili. Now Zeruko recently had a facelift, transforming the walls from lurid mint green to cool grey painted with graphic white seafood images – an ode to the sea-faring past of this stunning, sophisticated city. But grey is not a good colour to tickle the taste-buds, nor does it exude warmth and nor did we find the plastic tables and chairs exactly wow. In fact the entire bar felt marginally like a fast food joint where you pick your pintxos, sit down to consume them (the counter area is limited by the sheer number of pintxos on display), then exit fast – there’s virtually zero ambiance.

Yet Bar Zeruko produces an incredibly ambitious range of the good, the excellent, the quirky and, yes, a few ugly misfits. Take this jar (above) that I picked, seduced by its enigmatic contents. After being whisked away for a warm-up, it re-appeared on a plate, tipped upside down to reveal a rather average-flavoured slop – not the best call. Eggyolks and aspic featured heavily, looking translucently tempting but actually not hugely tasty, although I loved the textural balance in the mini-bomb (first pic above) that incorporated mushrooms with ham and a thin pastry crust beneath its aspic shell. Better still was the prize-winning bacalao smoked over charcoal on an ingenious mini-grill (below), subtle, simple yet exotic.

Smoked bacalao on a mini-grill at Bar Zeruko, San Ssebastian

On the whole I’d say we enjoyed Zeruko’s offerings, but it’s not the kind of place you want to hang around in – nor were locals exactly thick on the ground. So, it was back to the future at Borda Berri where the counter has no pintxo line-up, just rapidly emptied glasses of txakoli or beer, the bar is packed with a cheerful mix of locals and visitors, and each pintxo (chosen from the board) is cooked to order in the kitchen. That makes hard work for cook-owners Marc Clua and Iñaki Gulin yet they cruise on chirpily, always coming up with inventive new delicacies like this little curl of octopus or their perfectly cooked creamy risotto.

My conclusion? Pintxos shouldn’t just be about appearance, however molecular or ‘techno-emotional’ they may be – and that’s something Zeruko has perhaps misunderstood.