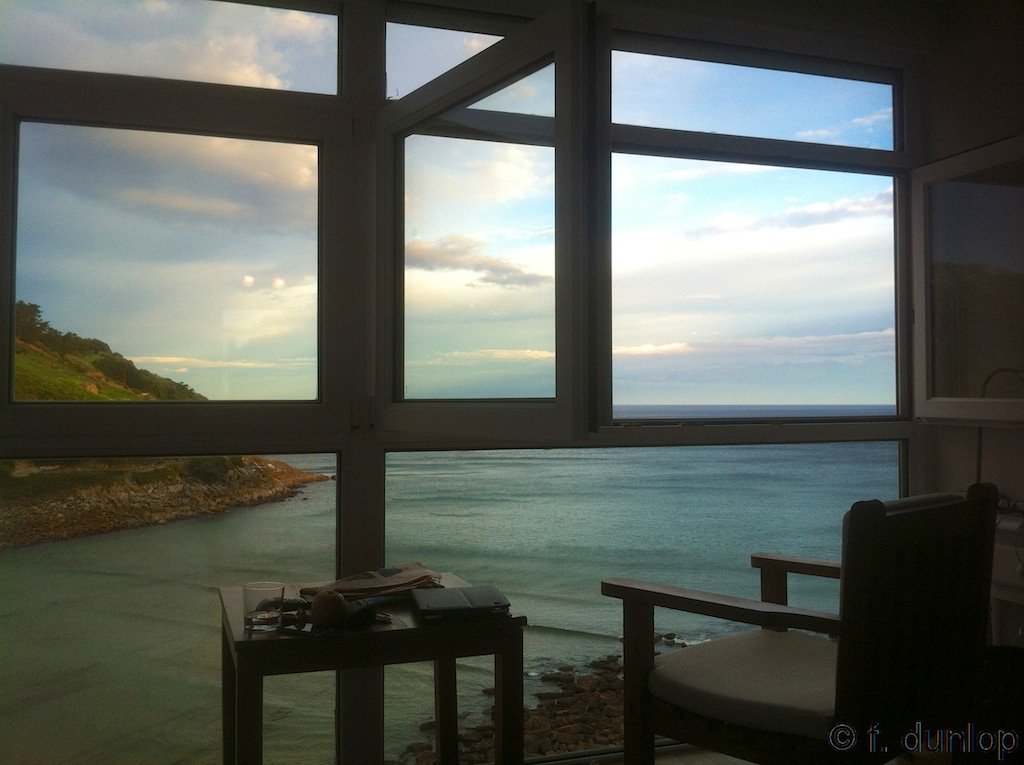 Now here’s a hotel with a view. Even better it comes with a non-stop lullaby of waves, the ebb and flow of the Bay of Biscay or Cantabrian Sea. Location? Getaria, in Spain’s Basque Country, on the hilly, indented coastline that stretches 90km from Bilbao to San Sebastian. With spectacular panoramas, pretty little ports and one or two eye-sores, this costa is surprisingly little visited by non-Spaniards despite the fact that in the verdant hills to the west is the town of Gernika (Guernica), rendered tragically historic and iconic (hate to use that word) by Picasso after bombing by Franco and his fascist allies in 1937. Even more persuasive are Bilbao’s Guggenheim and airport as well as, half an hour’s drive in the other direction, the intoxicating gastro-hub of San Sebastian that I’ve covered before before and here.

While on the subject of intoxication, it’s worth knowing that the coastal hilltops near Getaria are where vineyards produce txakoli, that sparkling Basque white wine that is poured theatrically from aloft to kick-start the bubbles. Getaria itself is topographically pretty unusual, jutting out on a promontory into the sea, looping round a fishing harbour to end in a humped ‘mouse’ and flanked by sandy beaches. Behind, across the main coastal road which swings past, the steep, upper part of town is such a struggle to reach that they’ve now installed a series of outdoor escalators. I found it pretty surreal to be spirited up these airport accessories for a spot of nocturnal exploring – not exactly the character of such a historic place, but hey, some people live up there.

Right at the top looms a sleekly modern museum devoted to one of Getaria’s most famous sons, Cristobal Balenciaga, that fashion-designer of Parisian allure and fame who became the favourite of Grace Kelly and Audrey Hepburn. Son of a Getaria fisherman and seamstress, he was yet another case of a talented Spaniard who went awol, fleeing his country during the Civil War, never to return. As usual in contemporary Spain, the museum project was plagued by corruption and scandals, with ball-gowns going missing and a Cuban architect disappearing tail between legs. It eventually opened in 2011, several years late, but has not exactly been a resounding success despite a dazzling collection and oversized building. More wasted euros?

Who cares though when the old part of Getaria is such a delight, a maze of narrow streets lined with lofty stone houses including the Gothic era walls of the Saiaz Hotel. This old quarter was where another famous Spaniard was born, the navigator Juan Sebastian Elcano, who steered Magellan’s fleet safely home in 1522 after circumnavigating the globe. Towards the end of the promontory appears another local curiosity, a huge 14th c church built with a notable slope and cunningly incorporating a tunnel for pedestrians to reach the harbour – making the walk a bit of an ingenious mystery tour.

Gastronomically speaking, harbourside life scintillates, as this is where you can settle onto the broad terrace of the Mayflower to devour ultra-fresh grilled fish. I love the Getaria system of little winches to raise or lower the grill over the coals as needed – charred fish yum! The Mayflower, despite its location and great views, offers reasonably priced fresh seafood – but for sophistication and quality cuisine the place to go is Elkano, right beside the main road. That’s where you can chow down on that rarified Basque speciality, kokotxas, aka hake cheeks, courtesy of established chef Pedro Arregui.

Finally, after a blissful night lulled by the waves in the Saiaz Hotel, morning brought a visit to Getaria’s fish market. Here we chatted with a local woman who was eager to explain that few fish were locally sourced, and that most came from far afield. Some boats were away for two weeks (that says West Africa to me), while a few years ago, she continued, anchovies (a major Cantabrian Sea special) were near impossible to find. Now though they’ve re-generated, spelled out by heaps of the silvery fishlets.

I was rather mystified by the storeroom full of frozen tuna, duplicated in the back of a delivery van. It reminded me of a friend’s account of visiting Tokyo’s famed fish market where he spotted an entire off-limits section packed with Southern Bluefin tuna – yes, the one that’s nearly extinct. It seemed they were being stockpiled awaiting extinction, when the value would of course rocket. Here in Getaria, the frozen tuna were more likely due to fishing quotas having been reached (Atlantic Bluefin tuna stocks are only 20% of what they were 40 years ago) – but that doesn’t stop 90% of the catch going to Japan for sushi. Too much.

Whoops, I’ve gone off-track from a hotel with a view to depleted fishing stocks. But that’s life these days – everything comes at a (environmental) price.