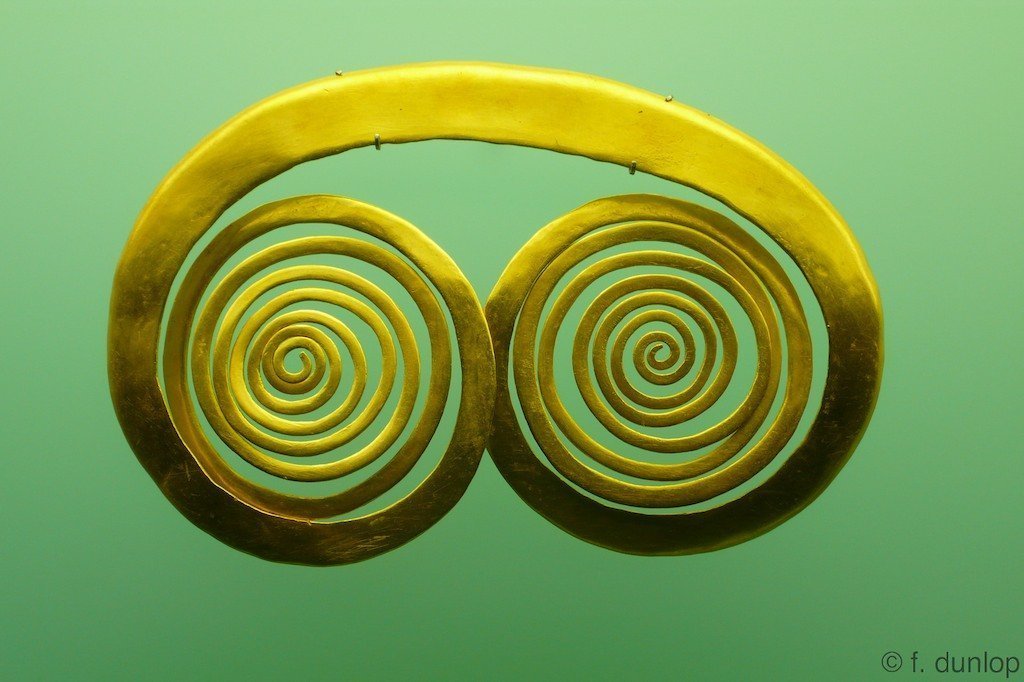 It’s rare to see an exhibition of artefacts with no clear indication of their age. In the case of Beyond El Dorado, guesstimates span well over 1000 years, leaving you lost in the mists of time. The reason? You can’t carbon-date gold. This illuminating exhibition at the British Museum is all about Colombia’s deep-rooted attachment to the magical metal, an addiction which ended when the plundering Spanish conquistadores rolled in. I was lucky enough to see the exhibition at an evening viewing, so notching up the enchantment. Despite being London on a drizzly November evening, the glistening forecourt managed to look suitably dreamy.

It’s not hard to understand the indigenous fascination and obsession with this lustrous material, as no other is so mesmerising. Far from pure, it was usually made into an alloy, tumbaga, which by combining copper and small amounts of silver with the gold, became far more versatile to work – hence the extraordinary beauty, refinement and diversity of the exhibits. Some are intricately worked, incised or use filigree, while others are two-dimensional, whether ceremonial masks, visors or these little flat figures (Keith Haring invented nothing incidentally).

Pride of place on the poster and catalogue cover of the show is this stunning pectoral ornament below, 30 cm high, that was unearthed in a tomb, carefully placed on the chest of the deceased. As in so many ancient cultures, numerous ornamental objects accompanied their owners into the after-life.

For the wise indigenous Colombians, gold was not about monetary value, to be hoarded or invested in as in our mercantile society today, but about symbolism and spirituality. Figures on these gold ornaments are often inspired by a mythological world inhabited by the souls of animals, birds and plants. The jaguar, a guardian spirit, appears again and again, as do monkeys, bats, even lobsters.

Hallucinogenic drugs (tobacco, coca and yopo) helped the users’ imaginations, taking them on ‘trips’ into fantasy worlds in a repetitive, transformative process thought to keep the world in order. Maybe we could do with a bit of that today? Part of the ritual was the mixing of coca with lime powder (made from crushed shells), and both ingredients were kept in exquisitely crafted gold containers, from ultra-simple forms to the highly ornate.

There were musical additions too, like bells and rattles in countless forms, or tiny tinkling discs attached to this Zenu nose-ring for example (above). The streamlined minimalist design could have been made yesterday. In contrast the necklace below alternated stone beads with gold hammered then shaped into insects – dated 1600BC – 100AD.

Not all was glitter, as superb ceramic pots and whimsical ceramic figures featured too. The figure in the centre of the trio below (dated AD700 – 1600 – a typically cavernous estimate for this exhibition) is yet another form of rattle.

Altogether it’s a riveting and rare show, which runs till March 23 2014 in London, so there’s plenty of time. If you miss that, well you’ll have to go to Colombia itself to discover this dazzling, highly symbolic world at Bogota’s Museo del Oro or at Cartagena’s. To finish, here’s a beautifully crafted Zenu spiral I snapped at Cartagena‘s Museo del Oro a few years ago (see here for relevant blog). 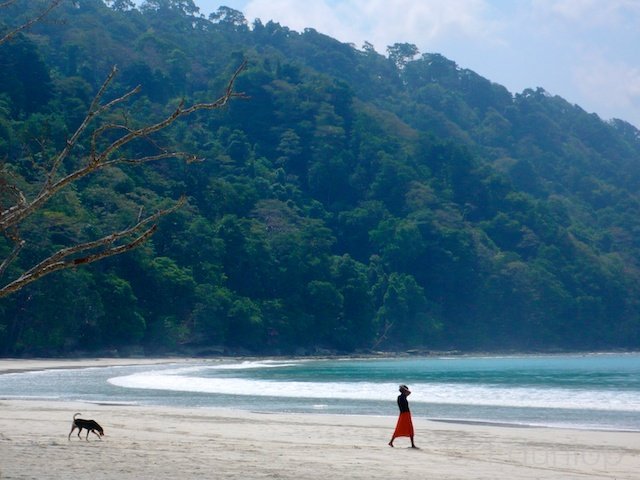