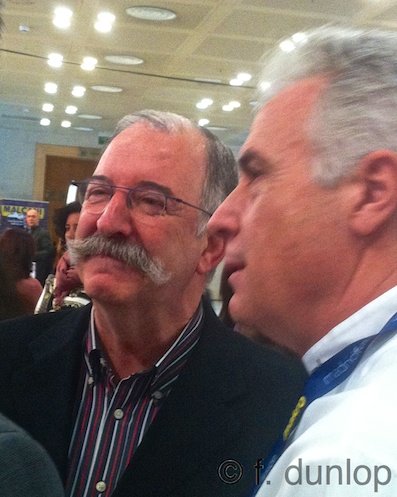 Three days of intense gastro activity earlier this week characterised Madrid Fusion, the annual jamboree of roughly 100 international chefs plus armies of sous-chefs and trainees. Although 90% are Spanish. a handful of foreign chefs are invited, this year from the Andean axis (aka Peru, Bolivia and Chile) and from Flanders. Despite these regions being from opposite sides of the world, they showed unexpected similarities – making full use of the `local` (from llama meat to North Sea bycatch) and wild indigenous plants. So does that mean we have reached the end of gastronomic hyperbole?

Far from it! Although Madrid Fusion this year staged parallel talks and presentations under the umbrella Saborea España (Tasting Spain) to demonstrate the breadth of more classic regional cooking, in the end you couldn`t help but be rivetted by the cult of star-chefs. (Incidentally among the Spanish gourmet producers who exhibited in parallel, I indulged in the fattest anchovy I’ve ever seen, courtesy of Santoña, plus kilos of jamon iberico here there and everywhere).

With Ferran Adria out of the picture, there`s elbow room for showing off the incredible talents of Joan Roca (El Celler de Can Roca, Girona, last year no. 1 in the annual hierarchy of world restaurants), Quique Dacosta (Alicante), Elena Arzak (Arzak, San Sebastian), Angel Leon (Aponiente, Cadiz) and David Muñoz (DiverXo and StreetXo, Madrid). These were the genii who in front of an impassioned audience of pros and amateurs, conjured up a succession of meticulous, gorgeous and highly labour intensive dishes: transformations and juxtapositions of the rare, the unexpected and even, sometimes, the mundane. The end result was never less than pure aesthetics, magnestising dozens of photographers with sharp elbows.

So despite the absence of showman Adria, Spain`s star-chef system is booming, although arguably the most amiable and least pretentious, the straight-talking, moustachioed Pedro Subijana (Akelaré, San Sebastian), seen above with Pedro Larumbe, dates from the 1980s first wave of nueva cocina. In contrast, Mario Sandoval seemed to be the most ubiquitous, hopping on and off the stage for presentations, volunteering to participate in another, permanently visible in the congress hall in his white jacket and immaculate slicked back black hair.

No doubt only too aware of the media potential, he generously hosted our jolly band of 50 + international food journos at his restaurant, Coque, treating us to an endless tour de force of extraordinary, not always entirely successful dishes. Below is a seafood medley with pistachio purée – on an edible dish. Then comes roasted beetroot sitting happily by ground beetroot, coconut and almond. The best was the third pic below, a ‘winter tasting dish’ beautifully composed morsels of beef, thistle, pine-nuts, cream of boletus and little puddles of green tea sauce – exquisite and light.

The restaurant has been in the family since 1949 but in the last 10 years Mario and his two brothers (reminiscent of the 3 Roca brothers) have astutely raised its profile. Sadly the interior is costly kitsch, lots of velour, glitter, big wing chairs and big convoluted lamps.

Not exactly the kind of place for a relaxed meal – this is where you`re lectured to by the waiter about each highly complex concoction. But hold on, haven`t we moved on from this? After 12 courses our group staggered out into the early hours of a dilapidated village just south of Madrid – all rather incongruous.

Another common thread among these jet-setting chefs appears to be proving their intelligence in fields way beyond `mere` cooking. For example Joan Roca has an in-house botanist to help build up a data base of local wild plants, their seasons and their exact locations, and Sandoval is on a similar path in conjunction with the Madrid Institute for Rural Research to retrieve local fruits and vegetables via their DNA. The Turkish chef, Mehmet Gurs (Mikla, Istanbul), has a resident archaeologist, while Andoni Aduriz (Mugaritz) is working on a food app to transmit virtual smell with Professor Cheok of London`s City University. Meanwhile seafood-obsessive Angel Leon of Cadiz tunnels deeper and deeper into obscure marine biology in order to bring his clients the utter luxury of marine light on their plates – yes, blue light a la Martians which he managed to re-create in the darkened auditorium – wow! Impossible to photograph, so here he is taking his bow in front of a photo of his planned new premises. Not exactly modest.

It`s all futuristic, high cost stuff – partly designed to help the planet for future generations, and partly, I’m sure, for mediatic show. So when I saw the Flemish cook, Kobe Desremaults (In der Wulf, Flanders) talking about the utter simplicity of boiling potatoes (local of course) in buttermilk, foraging in the forest for plants and mushrooms, collecting seaweed on the beach, eating with your hands and using stones as plates (“there are too many sterile products in the world already”), I breathed again. Perhaps there is a gastro future after all, more accessible, more credible, with more authentic flavours – and above all more sustainable.