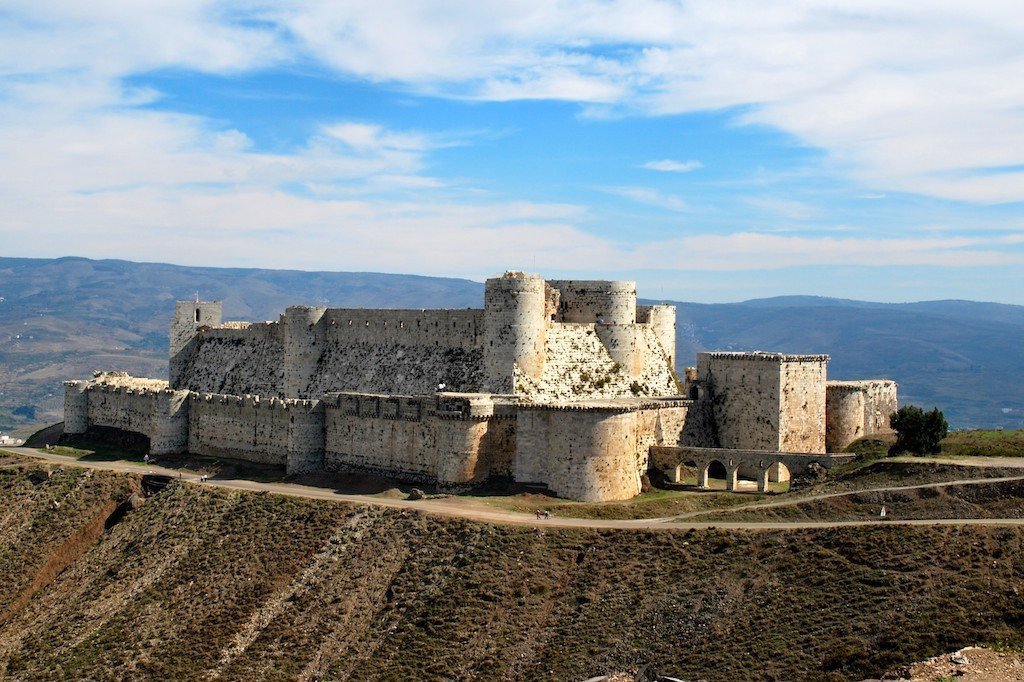 Last night I watched a short but riveting report on Channel 4 news about the demise of that most outstanding symbol of the Crusaders, the 12th century crusader castle of Krak des Chevaliers. Like every other monument in Syria, it has become a mangled toy in the relentless struggle between government and rebels. So I thought the moment had come to post some photos of the masterpiece before the mortars started flying.

When I visited this 1000-year old fortress, in 2008, there were just a handful of visitors, mainly French, while one or two guides lurked hopefully at the entrance. Today it has just been recaptured by Assad’s forces in Syria’s chaotic ongoing civil war, and the rebels who inhabited it have fled – or been killed. A three-month siege was the catalyst.

Krac (from the Arabic word for fortress) is one of those wonders of the world that you never forget, a magical castle of gleaming limestone, towering high on a hilltop with massive walls, ramparts, vaulted corridors, towers, courtyards, terraces and even a Gothic church smack in the middle. With the wind whistling around us as we looked out over the fertile hills, it wasn’t difficult to time-travel a few centuries back to the crusaders, holed up here during their ongoing battle with Islam. How times (don’t) change.

In yesterday’s report, it was depressing to see how the insurgents (in turn holed up here in their fight against the merciless Assad) had camped inside the place, even using the slit windows, whose function was originally for shooting arrows, as perfect sniper locations. But that wasn’t enough to withstand the mortar shells lobbed by Assad’s troops.

Inside the church, the presence of mattresses, books, a few cooking utensils and even kids’ toys indicated that the rebels had brought in their presumably homeless families too. Not quite the 2,000-man garrison that inhabited the castle in the early 13th c, nor the curious communities of the late 19th c and again in 1933, when 500 people were shunted in and the castle passed into France’s colonial hands.

It’s had a long life, withstood earthquakes, sieges and multiple changes of ownership, so let’s hope Krak proves its might yet again. Let’s hope too that its fate is better than that of Homs, just half an hour’s drive away – now a depressing burnt out shell and hell-hole. There are now estimated to be 2.5 million refugees of this war – mainly in Lebanon, Turkey and Jordan. A form of crusade continues, it’s just shifted aim and belief. No one quite knows who are the good guys, who are the bad.