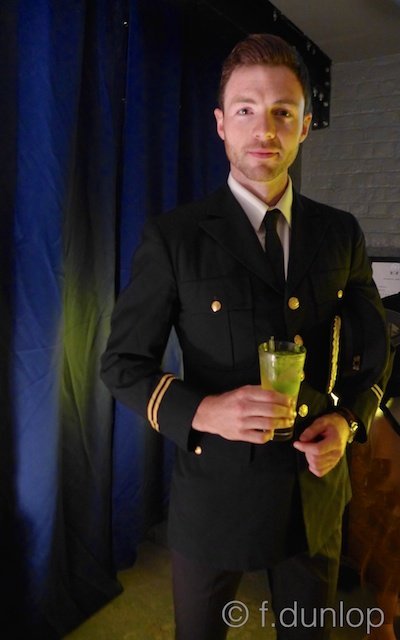 Funny kind of airport I thought. There it was, a stunning neo-classical church towering into another of London’s brilliant blue evening skies. And there I was, clutching my ‘boarding pass’ – destination: Andalucia (where else, followers of this blog might ask).

But this time my trip turned out to be a bit of a wheeze, a vaudeville-sprinkled cocktail (including those too) of staged cameo acts and surprisingly good food – eaten in the company of 50 or so other punters. This was a preview of 11 upcoming evenings designed for those jet-set Londoners who want the Andaluz atmosphere minus the angst-ridden travel. Behind it is Dine Mile High, a company that specialises in pop-up restaurants and themed events.

So in I sauntered to the ‘check-in desk’ (above), where two glam flight attendants found my ‘ticket’ and handed me my ‘passport’ for the evening. Guided ever downwards into the ecclesiastical depths, I eventually found myself in the ‘departure lounge’ – aka cocktail bar, plastered with airline posters and full of comfy designer sofas.

With an iced rebujito (a sherry based mojito) in hand, I eyed the company. This included a youthful-looking ‘pilot’ who after explaining that he was due to ‘take off’ in half an hour, batted off my comment on the cocktail he was sipping, then kindly posed for a photo. Attaboy!

Meanwhile suitably sycophantic ‘flight attendants’ whirled around with trays of rather good fusion tapas – crisp blinis with slices of jamon and Manchego and tostadas with morcilla.

When take-off was finally announced, we were led into the vast main hall, where a soaring ceiling and multiple arches made a moody backdrop for two long tables laid for dinner. Hard to believe that years ago, before its demise, this space hosted Anglican services (it turns out that this former Holy Trinity church was designed by Sir John Soane in the 1820s to celebrate the defeat of Napoleon – so good thing the event wasn’t in honour of, say, Provence, or even worse Corsica, his birthplace).

From then on the evening unfolded to the tune of a four-course dinner studded with witty little floor-shows by the feisty flight attendants, including an interlude in the ‘Venta Toledo’, a side-space dressed up as a typically rowdy and crushed Andalucian bar.

Here some laughable attempts at jamon-carving by faux Andaluz barmen were the focus – a bit of a contrast to the real thing, but their heart was in it (mas o menos). And the decoration felt pretty authentic – nice theatre set guys – and of course more drinks flowed.

Back at the table quaffing not-so-great-but-drinkable vino de la tierra de Castilla, we furthered our gastro indulgence. The starter of Salmorejo with watermelon didn’t really appeal to me, but the hake a la plancha with quality migas (normally I’m not too keen on this rural special of fried breadcrumbs) and chorizo aioli did, while ultra tender roast ibérico pork with divine little pimientos de Padron slipped down a treat.

By the time we reached the yoghurt mousse with cherries and pistachios, we’d forgotten where we were, so it didn’t really matter that this was rather foreign to southern Spain. But then on came the final floor-show: flamenco, with all its hand-clapping, pounding feet, guitar and anguished voices – definitely a fast ticket to Andalucia. The only problem was that when it was all over I couldn’t find my way back to London, that church is such a labyrinth. But olé to the experience! 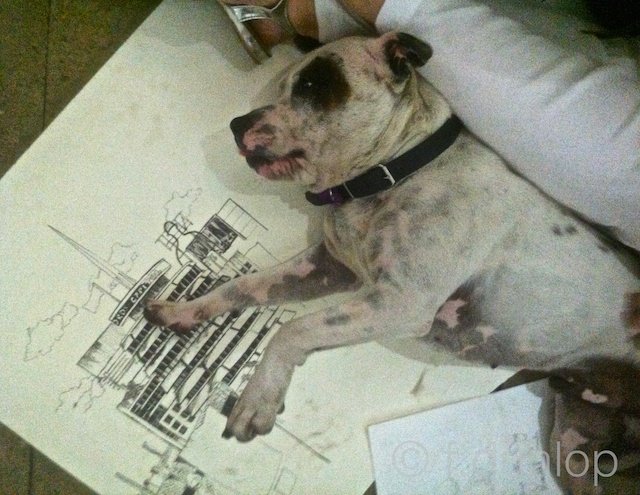