Improvisation versus method. That`s how I`d define this crazy city (Calcutta – or Kolkata), almost out of control but not quite, with a seething, ever-expanding population of 15 + million or so (like Mexico City, the exact numbers are hard to pin down), battalions of yellow taxis, an all too visible class / caste system and endless visual shocks. 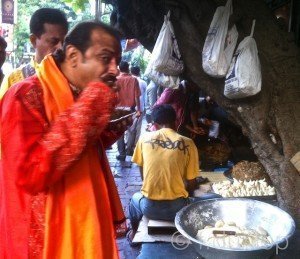 Finding your way anywhere is by trial and error, plus a bit of tribulation. Dodging honking auto-rickshaws, taxis and manic little Marutis, even hand-pulled rickshaws (yes, tragically they still ply their trade), negotiating the streets becomes an art. Even pavements can be hard-going, pockmarked as they are with mini craters and broken slabs, half occupied by rows of food-stalls where people chop, cook and eat, and sometimes fusing seamlessly with the street.

Then suddenly you are confronted by the beauty of an ageing edifice, a decrepit colonial mansion with peeling shutters, plants creeping out of fissures or roofs, half curtains obscuring some kind of life that, miraculously, goes on inside. Outside, a tarpaulin stretched from a tree to a bicycle might be home to a small family. Washing and tooth-brushing is done at the street-pump by the men at least, though who knows where the women manage it. A naked toddler with a huge red tika (the mark of Hindu sanctity) on his forehead sits and plays with a tin bowl – bizarrely happy. If only he knew.

The Bengalis of Calcutta constantly improvise. Their driving skills are extraordinary considering the gridlock they have to overcome, like dodgems snaking between lines of cars, honk honk, but never a scrape. And the patience of Job. Packed to the roof with people and bags, rusting old buses career past, inmates always with smiles – it`s a daily route after all.

And the method? Just watch the street kitchens. There’s an established hierarchy of tasks undertaken in tandem – some chop, others mix, mould or fry while still others assemble the finished goods and still another is a cash machine. Then come the eaters, upstanding male office-workers in impeccably pressed shirts or young women students in vividly coloured kurtas. It`s a Calcutta ritual repeated endlessly throughout the day – there`s no strict time. So finally, anarchy wins.