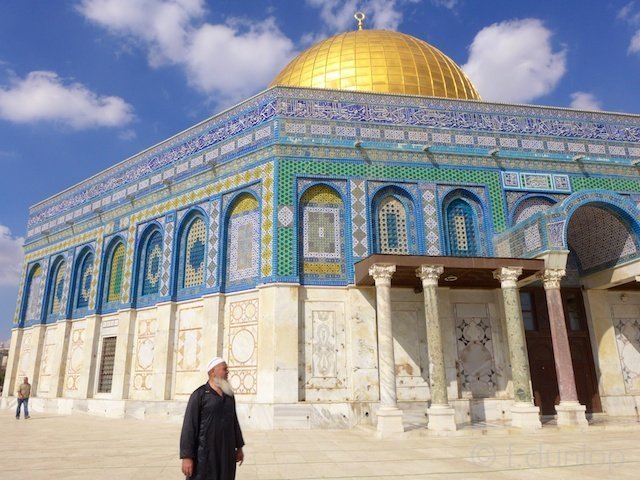 When I unpacked my bag the other day, wafts of za’atar enveloped me. No surprise really, as that’s the ubiquitous herbal mix (wild thyme, sesame, sumac & salt) sprinkled by Palestinians on tomatoes or used as a dip with flat-bread and unctuous green olive-oil. When cooking myself it was just too tempting to dip into a packet to flavour anything vegetal. Here’s a huge basin of it…

But that’s beside the point, and a different story to my arrival in Jerusalem a fortnight earlier. I was tired after the journey, it was late, my hotel restaurant had closed and I couldn’t find anywhere to eat nearby at Jaffa Gate. As Israeli soldiers (on alert due to Sukot, a Jewish holiday), blocked off the main entrance to the souq, I headed in the other direction, up a winding, deserted street: Latin Patriarchate (love those names).

Suddenly I heard “Welcome! welcome!” – familiar words used to translate mahaba, hello. They emerged from a very basic front room open onto the street, where two middle-aged men sat beside a couple of metal tables, a desk, a crackly TV, a half bottle of Johnny Walker’s, piles of bread and a few plates of sliced tomatoes and apples. In short, a Palestinian tapas bar! My kind of place – and hardly a den of extremist iniquity.

So in I went, much to the joy of the two old boys, rapidly joined by a third. A loaf of bread was thrust into my hand, then came a little glass of whiskey tinkling with ice, quickly replenished. Little English was spoken, but the atmosphere was warm, relaxed – and welcoming. Half an hour later one man was dancing to a raucous TV musical beamed from the Gulf. A perfect intro to Palestinian hospitality, though for me tempered by the bleakness of their situation. They even tried to refuse some shekels I offered.

Above all it was light years from the rest of this schizoid city, where sometimes you wonder if you actually exist in the 21st century. Because Jerusalem is a hotbed of extremism: Jewish, Christian and Muslim, the holy trinity! The pic above illustrates this, from the Muslim hand of Fatima to crucifixes and Jewish kippas. Groups of European Christians lug huge wooden crosses down via Dolorosa, Israeli Jews with ringlets and huge hats nod and bob like crazy in front of the Wailing (Western) Wall, and finally, if you can get inside, equally fervent Muslims murmur from the Quran in studious groups beside the spectacular Dome of the Rock. Some are technologically advanced, some not.

Most of the time I felt invisible – a ghost in a beautiful theatre-set which is gradually being taken over by Israel. Stunning old Ottoman houses in the Christian and Muslim quarters have been squatted by orthodox Jews who post a guard at the front door and make sure the Israeli flag flutters above. Some Palestinian families, after being evicted by force, are homeless. Yet in the atmospheric streets of the Muslim Quarter, the souq flourishes as in any Arab city. Pungent aromas of freshly ground coffee with cardamom, spices, flatbread straight from the oven, and falafel sizzling in oil followed me round – or lured me in.

I avoided the Church of the Holy Sepulchre on this visit, having experienced dozens of sharp elbows from Russian Orthodox Christians at the hotel breakfast buffet, so headed for the Western Wall. Once through security, an extraordinary, chaotic sight unfolds. The prayer section is clearly divided between men and women, though plenty of couples enter together, complete with voluminous pushchairs. High above looms the golden dome of Islam – a tantalising beacon?

As it turned out to be a special barmitzvah day, dozens of overdressed, overexcited women crowded behind a rail, some teetering on plastic chairs, to watch the precious 13-year olds being paraded by chanting male relatives on the plaza below. Emotion ran high. Other women had their heads firmly against the wall, stuffing little prayer papers into the cracks, while men in kippas (skull-caps) or big hats prayed further to the left.

Then I joined the queue in front of a walkway bridge that rose to the Temple Mount (the Israeli name), or Haram esh-Sharif above. One hour’s visit was allotted. More security, more machine-guns, more shuffling – then I was released through the Moors Gate into a breathtakingly vast space. In the queue, I had learned that the Israeli authorities change or stop the visitor-times for non-Muslims at the drop of a (big) hat, so maybe I was lucky. Although the sober 8th century Al-Aqsa mosque kicked off the visit, it was the Dome of the Rock itself that magnetised. Time was short, far too short to do the rest of the site justice.

Passing a garden area where various madrasa, Islamic schools, inspire Quranic reading-groups, I mounted broad steps through an archway to the spectacular shrine itself. The massive, gleaming dome was all too familiar, but I hadn’t expected the beauty and intricacy of the marble and tilework. Built in 688-91AD by the Ummayad caliph, it’s the older brother to the great Ummayad mosque of Damascus – whatever’s left of it now – although the exterior was refaced by Suleyman the Magnificent in 1545, in unmistakable Ottoman style. Who knows about the interior – verboten to non-Muslims.

To one side stood a delicate arched structure faced in exquisite 13th century tiling, the Dome of the Chain – allegedly the centre of the world. I could almost believe it, so exquisite were the design and craftmanship.

One or two veiled women craftily whispered Allahu Akbar into acoustically effective corners, and a handful of tourists wandered round in a daze, but otherwise this wonder of the world was near deserted. Compare it with equivalent monuments like the Alhambra! I later heard that foreign Muslims, after accomplishing the haj (pilgrimage) to Saudi Arabia, often try to continue to the Dome of the Rock as Islam’s third pilgrimage site. Attempting to cross into Israel / occupied Palestinian territories from Jordan, they are stopped by Israel’s merciless border police. Meanwhile non-Muslims are put through the security hoops and have to whiz through the site – apart from Jewish settlers who are given special treatment.