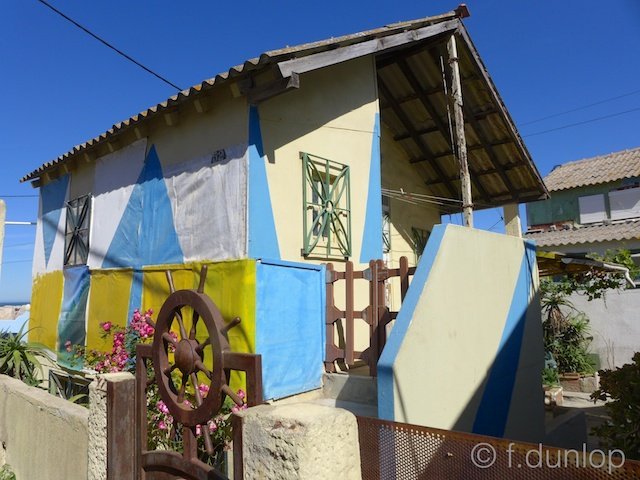 It’s not exactly idyllic as a seaside destination but if you’re staying in Lisbon and fancy a hit of surfing, a swim, a chilled Sagres beer to aid contemplation of the waves or just the sand between your toes, then this is where to go. It’s barely 20 minutes by car or taxi across the 25 de abril suspension bridge – a bit longer by bus from the Praça de España in central Lisbon, or via ferry then bus from Cacilhas / Almada (see my blog here). Destination? the Costa da Caparica.

So why am I calling it crazy? Well there’s a smidgen of history and a huge lack of planning, which means you find high-rise condominiums side by side with pine-forests and campsites, identical designer beach-bars (a recent misjudged innovation) and, phew, a bountiful central market. The campsites were the work of Portugal’s mid-20th century dictator, Salazar, who thought they’d provide R&R for exhausted workers, but today neighbouring high-rises and busy roads mean it’s hardly relaxing.

From the northern end of the beach I could just see the silhouette of the hills of Sintra across the estuary (above). It was somewhat ironic to visualise the whimsical palaces and mansions in that spectacular aristocratic bubble of parks and verdant valleys, then look behind me at a ramshackle fishing-village packed into a strip of land bordering the water’s edge. Worlds apart, with only the Tejo river in between.

A handful of fishing-boats bobbed about in the harbour, though no doubt there are many more which chug home at the end of the day.

The shanty-town style fishing village  is a jumbled development started by the fisherfolk themselves in the late 19th century. Sadly coastal erosion is rampant, so many of these idiosyncratic little shacks will not survive. Add to that the current demise of the sardine (numbers have plummeted due to overfishing) coupled with drastically reduced E.U. quotas, and the fishermen are not a happy bunch.

One lady we met as I admired her front gate (the rusting galleon above) showed enterprise, as she’s transformed her tiny family home into two holiday apartments – shoeboxes, but no doubt cheap.

I loved the personalised style of each house, unique, hand-crafted, creatively using any material to hand to produce a form of folk art. Something they nearly all shared was a barbecue squeezed into a corner of a yard – sign of great culinary discernment I’d say. You could sense the owners’ pride – as well as a certain amount of ‘keeping up with the Jones’s’. White-washing for example, as below – immaculate. And note the fishy beach towel.

There’s even a Fifth Avenue at its heart – above. Who knows if that was ironic or not.

In summer, visitors can catch an open mini-train which runs the entire length of this 10km-long costa edged by sand-dunes, as far as Fonte da Telha. The further south you go, the wilder and emptier the beaches, attracting a good sprinkling of gays and nudists. Take your pick, but above all avoid the packed beaches of roasting bodies at the start, nearest Caparica itself (and by extension, nearest the hordes of the capital).

Foodies shouldn’t miss the market in the town centre – above all the abundant fishy section. Here’s a rather dapper gent picking out his preferred sardine(s), and below that the Queen of Shellfish. Long may she reign.

Later, much later, there’s the bonus of those fiery sunsets over the ocean – before you head back to the splendour and sparkle of Lisbon, your lungs filled with invigorating Atlantic air.