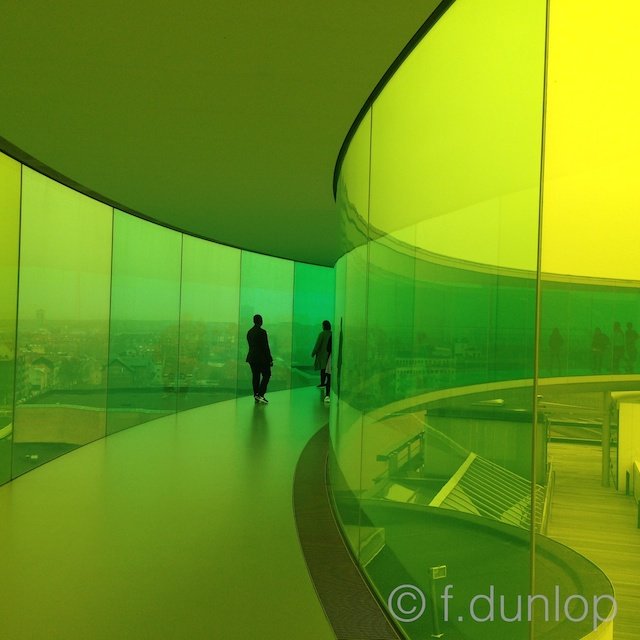 Status titles such as European Capital of Cultural always give a boost to a city, bringing loads of inward investment, extra jobs and a hoped-for explosion of visitors. They also inspire a bit of creative thinking at the town hall. For visitors, though, it can be equally rewarding to go in advance – catch a rising star, or certainly catch lower hotel prices.

In the case of Aarhus, in Denmark’s Jutland, the city is already on a roll. Despite its modest size and population (5.5 million), Denmark is a prosperous country, and Jutland shares the pot. Just under half the population lives in the region, with Aarhus home to 360,000, a good percentage of whom are students, making it the country’s youngest city – average age 38.  But enough of figures – what’s this youthful city all about?

Right now, cranes groan and bulldozers shovel earth all over the place, starting at the harbour which is undergoing a massive revamp. With shipyards now relegated to history, this has become the focus for endless projects, kicking off with a sumptuous civic multimedia centre, Dokk1. Opened last year, this huge modern building rising above the seafront is a perfect example of the seemingly perfect, streamlined society that Denmark nurtures.

Boasting state of the art design, an automated underground car-park (though many people rattle up on bikes, complete with kids) and a soon-to-come light-rail terminus, Dokk1 is vast, open-plan, luminous and adapted to all ages. Artworks include a ceiling of inverted models of modern landmarks from all over the world hanging above the atrium (above) and, technically ingenious, The Gong, by Kirstine Roepstorff, an enormous, three-ton tubular bell. Linked electronically to the local hospital, it booms melodiously every time a baby is born – that’s several times a day.

I was transfixed watching this model society at work and play, as kids ran around, dressed up from a wardrobe, played board games, read library books (Dokk1 houses Scandinavia’s largest library) or played outside unsupervised. The adults, all supremely cool-looking, chatted, sipped coffee, used the free computers or just hung out with their partners and/or children in this beautiful space.

It was designed by schmidt hammer lassen, a practice founded 30 years ago in Aarhus which has since spawned offices in Copenhagen, Shanghai and London. Furniture is of course wonderfully Scandi-style – in fact I thought I was back in Borgen, that Danish TV series that never seemed to end – or Follow the Money.

The same architects were responsible for Aarhus’ other impressive contemporary landmark: ARoS (above), an 11-floor museum of mainly contemporary art crowned by a brilliant work by Olafur Eliasson. Having laid prostrate in London’s Tate Modern’s Turbine Hall to take in his spellbinding sun installation, and undergone multiple reflections in his beguiling creation at the Vuitton Foundation, in Paris (read about it here), in Aarhus I was dying to see Eliasson’s Your Rainbow Panorama (2006-11). It didn’t disappoint.

This is a raised circular walkway walled in coloured glass  of every hue, so creating an ever-changing perspective on the city rooftops below. It’s a real crowd-puller and I’d hate to estimate how many selfies were taken there, but it works, and attracts a public of all ages. Typically Danish too were the raised vegetable beds and beehives that sat on the roof itself; the fresh veg goes straight to the excellent museum restaurant where a three-course Nordic set lunch sets you back about £20 or $30.

The director, Erlend Høyersten, a smooth-talking Norwegian in fedora, horn-rimmed specs and skull rings, is no shrinking violet, and the exhibition I saw, of contemporary Chinese artists was astonishing in scale and breadth. One installation in particular, by Xu Bing, hit me hard: 500,000 cigarettes (yes) were arranged to look like a tiger-skin (above), and represented 30 years of smoking 20 a day. Yikes that was me in a former life! Next on the ARoS schedule is our favourite Brit, Grayson Perry – far less threatening.

In contrast to this ultra contemporary, Aarhus has also preserved Danish architectural and social history at an extraordinary open-air museum, Den Gamle By (‘the old town’) where three periods – the 1800s, the 1920s and the 1970s – are reconstructed, inside and out. Without going into the detail of this enterprise which propels visitors through authentic time-warps, complete with suitably attired people and accessories, I’ll just say how I enjoyed being back in a 1970s bar – reeking of cigarette smoke!

It’s got to be the last place in Europe where you can smoke in a bar, in this case to provide an authentic aroma. It worked. And then there was the hi-fi and TV shop (above) crammed with vintage models — a bit like me. What memories!

There’s lots more which I haven’t got time to cover, like the innovative Moesgaard Museum) but I’ll end with Godsbanen (above), a complex of old freight train sheds converted into a melting pot of creativity – theatre, dance, studios, it’s all there. Plus the obligatory graffiti – in this case, as we’re in Scandinavia, on municipally designated walls.

Sometimes Denmark can be just TOO perfect.

Also see more of my Danish posts – on the fabulous Louisiana museum, on Elsinore and Hamlet, and on Fano island where you can forage for oysters and generally pig out,.. and on Danish design