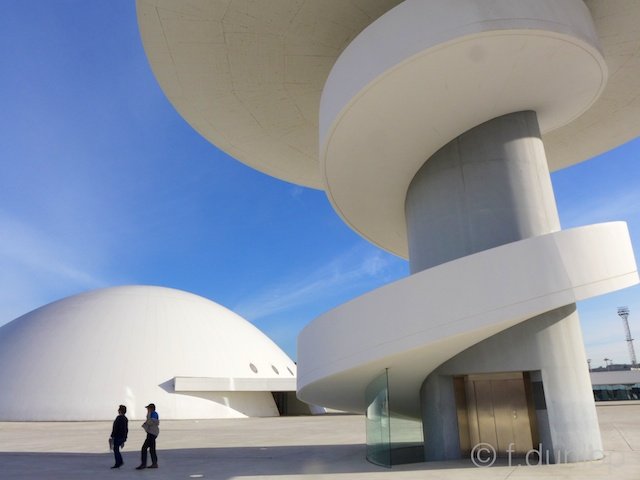 Art and starchitecture in northern Spain

Everyone knows about San Sebastian, its gourmet pintxos and its galaxy of Michelin starred restaurants. It’s been written about umpteen times, including on this blog here and here. Between gastro-indulgences, visitors might also spot the Kursaal (1999) – below, a masterpiece designed by Rafael Moneo, and the stylistic opposite to its famed contemporary, Bilbao’s fabulous Guggenheim,  an hour or so away.

Equally, any foodie worth his or her salt knows all about the crustacean and mollusc temptations of Galicia and, not least, Santiago de Compostela‘s spectacular Romanesque cathedral, the target of the so-called Way of St James.

But in between? Although not often talked about, there’s a swathe of cultural interest straddling the millennia, squeezed between spectacular sierra and sea. These are the regions of Asturias and Cantabria (the latter being the peninsula’s tiniest, with a population of only half a million). They share a long and illustrious history as this is where paleolithic man daubed away on caves to leave art galleries such as the famed Altamira.

Even if you can only visit a replica cave today  (the original being kept largely free of noxious oxygen) it’s as compelling as the sleekly designed adjoining museum by Manuel Franquelo and Sven Nebel. Though I’ll add a caveat – on my last visit in September, I found it had lost a lot of impact: rare film footage is now barely visible due to the lighting and some exhibits have completely disappeared. Who knows why – it was pretty much perfect before.

But back to lesser known artistic glories. Just down the hill from Altamira is the stunningly preserved village of Santillana del Mar, a medieval jewel (rather TOO pretty in fact) that also boasts an exceptional Romanesque basilica – in the background above. In the cloister, each capital spells or tells a story – this one below is just a taster.

In the summer hordes of mainly Spanish visitors pack the main street lined with disastrously tempting gourmet shops and restaurants. Here, a gastro-war rages between bottled Cantabrian anchovies versus Asturias cheeses and chorizos. Emblazoned stone façades spell out the town’s historical status, while immaculate half-timbered houses are the norm elsewhere.

Along the coast in the seaside town of Comillas is a little known wedding-cake (above) by Antoni Gaudi – El Capricho. Built in the early 1880s, it is one of his earliest designs. The bizarre blend of neo-Gothic, Arabesque and Spain’s own modernista style here tilts dangerously towards the kitsch. As the aristocratic owner was a musician, musical symbols are ubiquitous, as well as ingenious technical innovations, sublime craftmanship and a riot of sunflower tiles.

Neighbouring Asturias is a proud, somewhat ambivalent region backed by bucolic mountains – the Picos de Europa, but also heavily industrial. It was here that a local chieftain, Pelayo, dealt the first blow to the invading Moors in the 8th century while more recently Asturias ‘ coal-miners have made it a hotbed of left-wing militancy.

A constant thorn in Franco’s flesh, their general strike against the Falangist government in 1934 helped start the Civil War. This escalated into killing priests and even dynamiting the hallowed camara santa of the Cathedral. Franco’s revenge came fast and furious, culminating in the deaths of about 3,000 miners.

Luckily the present is a happier story. Asturians love their cider, while restaurants led by chefs such as Nacho Manzano in Arriondas and Gijon are booming. Fabada (above) is the classic regional dish, but there’s far more creativity in the wings. Oviedo, the capital, boasts another picture perfect centre of striking stone buildings, as well as three extraordinary pre-Romanesque churches; don’t miss San Julian de los Prados and its remarkable frescoes.

Otherwise the number of sidrerias (cider-houses) rivals the quantity of urban sculptures, few of which have much street or aesthetic cred, though the lifesize Woody Allen bronze really is his spitting image – when his glasses haven’t been stolen.

One thing you can cross off your list in Oviedo is Santiago Calatrava‘s Convention Centre, an ode to an ego about as gigantic as the building itself. It’s the usual story for this neo-futuristic architect: endless budgetary and technical disasters practically bankrupted the City Hall. In fact when the building collapsed during construction, Calatrava was fined €3 million. The building already looks dated – about 7 years on. A classic white elephant.

In contrast, Asturias’ industrial town of Aviles now proudly displays Spain’s latest gasp of Starchitecture: the Niemeyer Centre (above) which opened in 2011. It was also Oskar Niemeyer‘s last gasp – as the great Brazilian architect designed it aged 102 on the back of an envelope, then died shortly after. It’s sheer genius, and hard to take a bad photo as you walk around the three main buildings surrounded by water, connected to the old town by a bridge.

Here, surrounded by elegant art nouveau façades (you can’t avoid them in northern Spain), you shift gear to enter a harmonious city where life feels decidedly mellow and easy paced – far from the days of industrial action. But who knows…

Finally, yet another landmark is taking shape, set to fully open in 2017. This time it’s the turn of Santander, the beautiful sited Cantabrian capital that overlooks a sweeping bay. The name rings a bell? Yes, Santander is also an international bank that started life here in 1857, founded by the Botin dynasty.

The family continues to exert massive local power and influence, and its bank headquarters now look across at their very own, 80-million euro Botin Art Centre. Designed by the much feted Renzo Piano, two interconnecting buildings jut out over the waterfront right in the town centre (necessitating extensive landscaping and a traffic underpass), so have sparked plenty of criticism. However for once it’s private money, and the white ceramic structures will certainly put little Cantabria on the lesser trodden northern Spanish map.