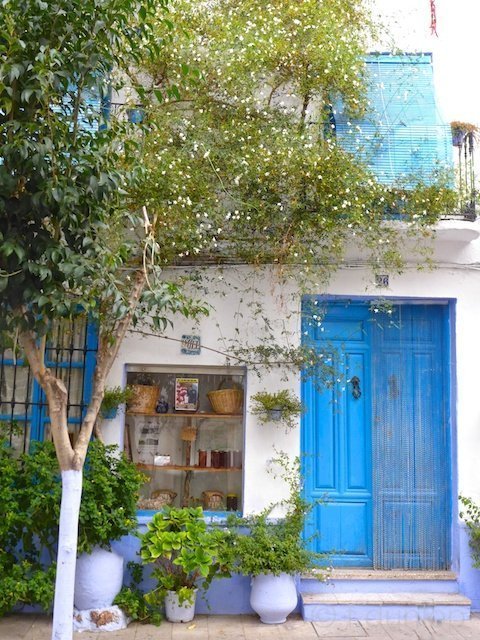 Lanjarón – foodie heaven in the Alpujarras

You may have spotted a bottle or two over the years, as Lanjarón’s mineral water goes back to 1830, though savvy Andalucians were already lapping up its medicinal springs in the late 18th century. Centuries before that it was a Moorish stronghold, leaving the iconic ruins of a castle teetering on a lone crag in the valley (below). Today, although it’s rare to find a bottle labeled ‘Lanjarón’ (in 2008, new owners Danone fused the brand with Font Vella), the spa town staggers on regardless. Lushly green, it’s packed with welcoming shops and cafés – and cheery geriatrics.

In fact thanks to the spectacular Sierra Nevada mountains which loom above, plus its fertility and proximity to the main highway between Granada and coastal Motril, Lanjarón has morphed into a beguiling little foodie town. Quite a change from the 1920-30s when luminaries such as Virginia Woolf, Bertrand Russell, Manuel de Falla and Federico Garcia Lorca flocked there to take the waters, before the Civil War put an end to such indulgences – and to Lorca.

But the gastro side of things was ever thus, as for eight centuries Berbers from North Africa farmed the surrounding hills intensively using techniques and seeds brought from home. Even after the fall of Granada to the Catholic monarchs in 1492, the Alpujarras became the place of exile and rebellion for moriscos (Muslims who were forcibly converted) in the footsteps of their last ruler, Boabdil, who hightailed it rather rapidly to Fez, in Morocco. Many morisoos remained, keeping the farming tradition alive and still flourishing.

Old boys in flat-caps are the norm here, seated on benches to chat while watching the small world (population: 3,500) go by, all part of the gentle rhythms of Lanjaron. And the imposing old spa hotel still stands by the western entrance to town. Luckily it’s been modernised, so you can take the waters, have a massage or have lunch at the organic restaurant. For me though, the main interest lies in trawling the groceries and delicatessens. Of course.

Piled high with luscious fresh produce artfully presented in baskets, this is cornucopia at its best and most seasonal, often homemade or handpicked. Nearly everything is local, whether quince (above), pomegranates, almonds, walnuts or squash, chestnuts, chorizo, goats’ cheese, honey, wine or crusty bread still warm from the oven (Panaderia Jiménez on Calle Real has pioneered incredible loaves ever since 1928). Not forgetting the local pan de higo – fig cake – or a necklace of intensely flavoured sun-dried tomatoes. Yes, it’s unadulterated foodie heaven and eminently affordable too.

Food and handicraft shops line the main avenue (Avenida de Andalucia extending into Calle Real) which is shaded by towering plane-trees and dotted with drinking fountains displaying literary quotes – Lorca again. It is said that the water is not pure spring water but I drank plenty and survived. Vivid jarapas (striped rag rugs), esparto grass baskets, wickerwork and local ceramics all add to the retail allure, rivaled by charming side alleyways of whitewashed houses brimming with potted plants and flowers.

Trévelez, higher up the long and winding road that threads vertiginously up these foothills of the Sierra Nevada, is the local source of top grade jamón serrano and other piggy delights, so Lanjarón’s shops overflow with hefty legs waiting to be sliced, or vacuum-packed portions. As Trévelez is peninsular Spain’s highest village at nearly 1500m (5000ft) it offers incredible mountain views and hikes, but access entails a tortuous route and personally I find the ambient piggy aromas of the village just too much.

Honeys abound around here too as bees feast on a wealth of aromatic blossom and flowers in the foothills – from pungent chestnut to orange blossom; there’s even a honey museum, the Museo de Miel. Some houses sell produce straight from their front windows (as above) so on my last visit when juicy black cherries were the fruit du jour, I was able to bag a kilo from an old lady for the princely sum of 2€.

And to eat at a seat? Arguably the most relaxing place is the cool, leafy garden restaurant of the well-appointed Hotel Alcadima (above) just down from the main street, with a terrace overlooking the valley and castle. It’s a relatively sophisticated place for rustic Lanjarón, a rambling hotel that started life in the 1950s as a public swimming-pool and is still family-owned. For less pricey,  sustaining traditional fare with equally fabulous views, head for Venta El Buñuelo, a friendly local restaurant on the main A348 road just east of town.